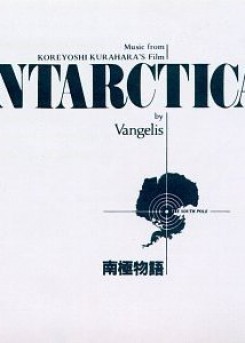 In 1958, the first Japanese Antarctic Expedition prepares to leave Showa Base to be replaced by a second party of scientists who are on board the ice-breaker, Soya. The Soya is unable to reach Showa Base because of a fierce storm, so a small plane carries the returning men to the ship.

The last two men, Ochi and Ushioda, are reluctant to leave since it means abandoning their fifteen sled dogs until the second group arrives. The dogs, their constant companions and only means of transportation during their stay, are chained together on a tether line on posts embedded in the ice.

When a storm cancels the departure of the second group of scientists, Ochi asks to be returned to the base to humanely kill the dogs rather than allow them to starve to death. The captain of the Soya decides that the risk is too great and fuel is low. He refuses Ochi's request and the ice-breaker heads back to Japan.

The dogs flail themselves against their restraining collars and chains. They are starving and freezing in the bitter Arctic cold. Eight manage to free themselves, but the rest soon die in their restrictive bonds.

The eight starving dogs run in circles searching for food, with littermates Taro and Jiro leading the pack. They attack a frightened sea lion and share the carcass. They dig fish out of cracks in the ice. One dogs falls into a crack and is crushed by the ice flow. Another, Shiro, falls off a cliff, breaks his leg, and separated from the others, lies down to die. A third dog, Jack, is marooned on an ice berg that drifts out to sea.

A year later, when Ochi and Ushioda join another expedition to return to their dogs, they find only Taro and Jiro alive. The death toll: Seven die in chains and six lost at sea.

The Antarctic sequences were filmed at the North Pole from December 1981 to February 1982. Though the film was released in the US by 20th Century Fox, it was produced by a Japanese film company, Kurahara Productions. The entire crew—including the dog trainer—was Japanese. Although the director's intent was to show that "man abuses his environment and all living creatures are in a precarious situation," the fifteen dogs used in the film were exposed to many stressful situations. However, the production company claimed that all of the dogs were trained animal actors and "that not one canine was hurt during the shooting." The seal that was attacked by the pack of dogs may not have fared as well. There is also the skua bird, which was plucked from the sky and eaten by Taro and Jiro. The blatant examples of animal endangerment, abuse, and neglect during production necessitated an Unacceptable rating from AHA.