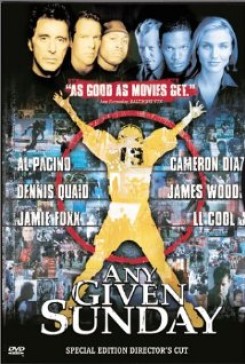 Any Given Sunday is a film about the world of professional football in which dreams either come true or get shattered, careers are made or lives ruined based on the outcome of a game. It is the modern gladiatorial event and an American institution.

One scene proves that it isn't wise to anger a fearless football player. During some verbal sparring while showering after a game, a team member gets angry and stalks out to the locker room. He returns carrying a small alligator and puts it in the shower with his teammates who seem a bit surprised as they scatter from the snapping jaws. Needless to say, the naked actors were pleased that the gator was supplied by a professional trainer and was merely a baby.

During one of the games the halftime show features a horse and rider in medieval costume prancing onto the field. The stunning white horse rears up as the music swells.