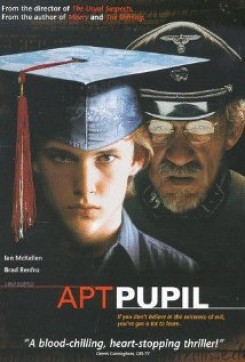 Apt Pupil, based on a Stephen King novel, delivers vivid, disturbing imagery. Director, Bryan Singer's follow-up to his thriller, The Usual Suspects, unveils evil in the person of a teenager who is obsessed with the history of the Holocaust and the blackmailing of a Nazi war criminal. The boy finds the man living in obscurity in middle America and, in unmasking the soldier's past, reveals his own evil nature.

The link between animal abuse and human violence is graphically illustrated. Both the ex-Nazi and the boy, who is fixated on war atrocities, act out their pent up angst on animal victims. Although no real animals were harmed to capture these acts of violence on film, viewers, especially animal lovers, may find the images arresting.

Apt Pupil is a film about Todd Bowden, a teen-age boy, who becomes obsessed with a local man who he believes is a Nazi war criminal, wanted by the Israeli government.

The ex-Nazi, Dussander, finds himself under close scrutiny by Todd, a teen who becomes obsessed with World War II Holocaust history, and who blackmails the former Nazi into reliving some of the more horrible moments from his war years. Dussander sits outside in his yard, drinking heavily, when a cat approaches and jumps in the chair opposite him. He picks up the cat and walks towards the house. Upon entering, he opens the oven, turns on the gas and attempts to place the cat in the oven. The feisty cat scratches Dussander forcing him to drop the animal to the floor. The cat runs and jumps onto the counter and out of the window. This scene was shot in cuts using a real and an animatronic cat. A real cat, is filmed from several camera angles as the actor supposedly attempts to place it in the oven. An animatronic cat was used when the animal's legs are seen entering the oven and again when the cat is seen as a reflection in the German's eyeglasses, struggling to get free. A fire bar was used for the oven flame and it was kept at a safe distance from the animal and actor.

Later, Todd is at school practicing basketball when he sees an injured bird in the doorway which leads outside the gym. The bird flaps its wings several times as Todd bounces the ball. He lifts the basketball above his head and demonically appears to smash the bird. Since the scene was shot in cuts, the ball is never seen coming into contact with the bird. To simulate the look of an injured wing, the trainer placed two small pieces of tape on the wing attached to a support that gently held the wing out at an angle. This gave the appearance of the wing being injured.