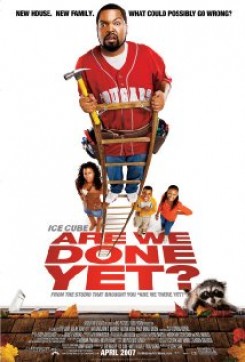 Are We Done Yet?

Nick (Ice Cube) and Suzanne (Long) are newlyweds. They decide to leave their tiny apartment in the city and move to a house in the suburbs after finding out she is pregnant. The suburbs seem like the right place until they begin remodeling their new home and dealing with a contractor (McGinley) who has some very strange ideas.

In one scene, we watch a chipmunk sitting on the floor eating an antacid tablet. A chipmunk named Squeak was placed on its mark by a trainer near an antacid tablet, a plastic pill case and an empty package of Rolaids. The pill case was filled with peanut butter and secured to the floor, along with the empty package. A trainer stood just off camera while the chipmunk licked the peanut butter. On screen, it appears as though Squeak is eating the tablet.

Another scene shows an actor holding the chipmunk in his hand when an owl flies through a nearby open window, grabs the chipmunk in its mouth and flies away. This scene was filmed in several different shots and edited together later. The trainer instructed the actor during rehearsals on the handling of the chipmunk. The actor was seated on a chair and the trainer placed the chipmunk in the actor's hand and gave it some peanut butter to eat. The actor raised his hand slowly and delivered his lines. For the next part of the scene, the real chipmunk was replaced with a fake one. The window was open and one trainer released the owl while another trainer stood across the set to retrieve it. The fake chipmunk had pieces of chicken hidden in it and the owl was trained to pick it up and fly to the awaiting trainer, who gave the owl the chicken. The owl was well-rehearsed for this scene. Three trainers with catch nets and cages stood off camera. Only necessary crewmembers were on set. When they learned that another production was going to be filming some noisy scenes in the next studio, the production arranged to film these scenes early in the day, out of concern that the noise might frighten the animals.

The production provided documentation that a fish and "dead" bird were fake.

For logistical reasons, American Humane did not monitor scenes with the dog, raccoon or deer.