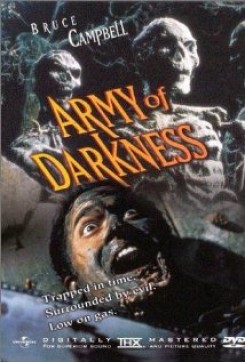 Army of Darkness is an adventure-fantasy utilizing humor, horror, violence and spectacular special effects throughout.

The story begins in 1300 A.D. where the hero, Ash, a slave, tells his story. The scene then flashes forward to the present time where Ash and his girlfriend, Linda, are vacationing in a remote cabin when they discover a book. The book is actually a magical scripture which unleashes powerful forces which kill Linda and attack Ash. He fights back and finds himself in a whirling abyss, which hurtles him back into time to the year 1300 where the enslaved Ash, bound in chains, is brought to the crowded courtyard of a castle. He is tossed into a large, deep pit and attacked by supernatural monsters called Deadites. Deadites are the dead who have come back to life. Somehow, his twentieth century chainsaw has been magically transported with him and he uses it to destroy the Deadites and get out of the pit. Once topside, low and behold, a Remington rifle materializes, and he uses it to convince the people that he has extraordinary supernatural powers.

They assume Ash is The Promised One, that a prophesy has foretold would be sent to them. When he asks a wiseman how he can get back to his home and time, the wiseman tells him that he must find a book called The Necronomicon. It has the power to transport him home. The book can only be retrieved by The Promised One. He alone must make this quest because that's how it's been written in the scriptures. Once The Promised One returns with The Necronomicon he is to lead the people in battle with the Deadites' Army of Darkness. Ash is not interested in fighting any battle, but he does want to get home, so he agrees to get the book. He is warned by the wiseman that the quest will be filled with many terrors as The Evil does not want to lose it's hold on the book and will find a thousand ways to stop him. Ash embarks upon his odyssey where he soon discovers the wiseman was indeed prophetic.

There is much horse action in Army of Darkness as most of the story is set in medieval times. Ash embarks upon his quest astride a horse who rears up into the air and leads Ash off into the mist. His horse runs as if frightened by an evil spirit, then turns and runs away, and Ash is knocked off his horse and falls to the ground. To achieve this the actor rode his horse to a mark in front of the camera where the off-camera trainer cued the horse to rear. The rider and horse then turned away from the camera and ran from A to B. For the fall off the horse, a stunt man was used and the horse ran riderless to wranglers. There are numerous shots of Ash riding or galloping to or from each of his stops on his odyssey astride his horse. At times a stunt man doubled for the actor.

When at last they begin their battle, the horses of the people are wearing armor and headdress and the soldiers carry swords and spears. The swords and spears were made of rubber for safety. Armor and headdress for the horses were light weight and were not binding in any way. The horses of the Deadites' army wore a filmy fabric which was draped over them and tattered to give them an eerie decaying appearance. For the most part the horses are not directly involved in any of the battles as the battles are done in lots of cuts with close-ups of the ghoulish Deadites. For a scene involving an exploding fire ball, cotton was used to protect the horses ears, and no horses were close to the explosion. A variety of other animals are seen only as background or atmosphere such as chickens, oxen, sheep, goats and a donkey.

Army of Darkness is an example of a film that might have been rated "Unacceptable" if American Humane had not been there. The person originally hired as head wrangler was an experienced horsewoman, but inexperienced in film making. She in turn had hired other nonprofessional horse people. When our representative arrived to supervise the animal action, many corrections, changes, and replacements had to be made. The production company was completely cooperative with American Humane and allowed our representative to have total control of any situation involving the animals.