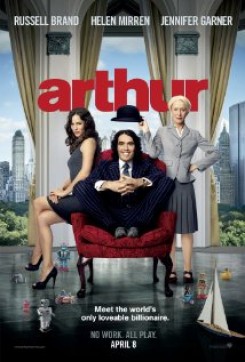 A rich playboy is on his way to losing all of his inheritance if he continues to misbehave and not marry the girl who his family wants him to.

In the scene where Arthur (Russell Brand) and Susan (Jennifer Garner) are taking their wedding shower pictures at the mansion, they are both seen riding together on a horse. For scenes that showed the actors close-up, the actors rode the horse at a slow pace. For scenes where the horse is galloping, stunt riders replaced the actors.

All horseback riders were skilled at riding, mounting and dismounting. All running/galloping scenes were well-choreographed, and actors used caution while on or near animals. When the horse was seen rearing, this was a trained behavior that was achieved with the help of an off-screen trainer who cued the horse to perform the action. The horses were well-rested between takes.

When Hobson (Helen Mirren) is in bed watching television, she was watching stock footage of a bear documentary obtained from the Discovery Channel.

The pigeons seen roaming near a fountain in the city were merely caught on film in their regular habitat, doing what came naturally.

The fish seen in the telephone booth in Arthur's room were part of an aquarium built just for the movie. The aquarium was properly equipped with a canister filter and air pump for oxygen distribution. The production staff built the phone booth around the aquarium. The fish were transported to the set in oxygenated fish bags packed in styrofoam boxes, and the fish were returned to an 800-gallon tank after filming was completed.