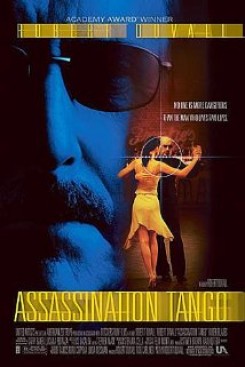 An aging assassin named John J. (Robert Duvall) travels to Argentina to complete a mission, leaving his girlfriend and her daughter behind in New York City. While in South America, John meets a beautiful woman named Manuela who becomes his dancing instructor. His mission is delayed, and he begins to care for Manuela, despite his girlfriend back home and the cold-blooded purpose of his mission.

AH was not notified by production of the animal scenes and did not monitor the animal action. All of the animals used in the film were supplied by private owners, but AH did not receive contact information in order to verify the treatment of the animals. We are rating the film Unknown.

Animal action in the film is mild, but there are several animals used. A girl is seen riding her horse in an indoor riding range and jumping it over a low hurdle. A panther is seen in its cage at a local zoo, and later in a dream sequence as it watches a couple dance. This was filmed at a local zoo in Buenos Aires. Also, a poodle is seen briefly in a limo that picks up John J. at the airport. A few other animals may be found in the background scenes in Buenos Aires as well.