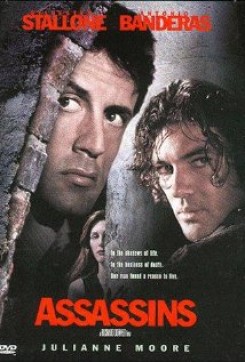 Assassins is a suspense drama about two hit men, Robert Rath, a long time professional hit man who has reigned as number one for years, and Miguel Bain, a young assassin aspiring to take Rath's place.

Rath tries to figure out how Bain seems to be always one step ahead of him. Someone out there is giving them both the same contract and the only communication either one has with their contact is by lap top computer. When Rath gets his new contract, it is to find a surveillance expert, Electra, a lovely red head, who is selling a synthetic heroin formula to a Dutch buyer. The conditions are, to assassinate both people and retrieve the formula which is on a computer disc.

The next day Rath goes to the destination of his assignment, only to find out that, once again, Bain has the same contract. The difference this time is that Rath has taken the mark, Electra, along with the computer disc. Rath assures Electra that he won't kill her if she stays with him. Until Rath turns in the disc for payment, Bain will still be hunting her down. Therefore, she agrees to help Rath. Electra is going to drive the car when Rath makes the switch for the disc. She will pick him up at a prearranged destination, just in case they try to ambush him.

As Rath and Electra are driving away after the switch, he notices that the briefcase causes the radio to loose reception. He tells Electra to pull down an alley and as they drive by a dumpster, he tosses the briefcase inside. Electra looks in her rear view mirror as she speeds away and sees the dumpster explode. Just when Rath thinks he has lost everything, Electra laughs and tells him she kept the real disc, just in case they were double crossed.

The adventure begins, taking them from the US to the Caribbean, as Rath tries to figure out who is double crossing him and why. Since the disc and Electra are still loose, Bain still has a contract to fulfill to prove he is the number one hit man. The only way to do that is to kill Rath. When Rath finally finds out the true identity of the person who orchestrated this little charade, he is shocked and amazed.

In another scene at a hotel, Electra gets upset about the situation she is in and goes to the bathroom, taking Pearl with her. While in the bathroom the cat stands up by the toilet, putting her paw on the handle, trying to flush it.. The trainer had placed food on top of the handle and used a clicker to get the cat to press it. There are several other scenes of the cat in the bathroom. For example, walking across the vanity, jumping onto the toilet seat, etc. These scenes were also accomplished with the use of a clicker and food as a reward.

In yet another scene, Rath is chasing Bain through an alley when he runs past a dog behind a chain link fence. The dog rushes towards the fence, barking and jumping in Rath's direction. To accomplish this scene the trainer merely released the dog from inside a building. The trainer used voice commands to get the dog to run in and out of the building to the fence.

While in San Juan, Electra and Rath are climbing up a staircase in a burned out hotel when they spook some pigeons in the courtyard. This causes them to fly away. The trainer merely released the pigeons from one side of the courtyard while the second trainer stood on the opposite side with seed in his hand so they would fly towards him.

There are many other scenes involving the cat walking from one area to another in hotel rooms. The cat had been trained to come to a clicker and he was merely responding to the clicker. In other scenes the cat is seen being carried in a pet carrier.