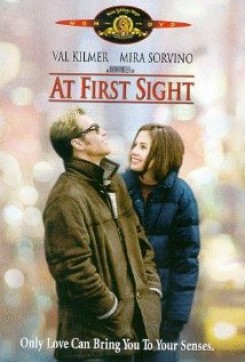 At First Sight is a film about a blind man, Virgil, who lives in a small mountain community and is looked after by his sister Jennie. When Virgil meets Amy, a young architect visiting the ski resort where he works as a masseuse, he quickly falls in love with her and moves to New York to be with her. After Amy arranges for an operation (which is initially successful) to restore Virgil's sight, their struggle begins, as they both have trouble understanding each other's perception of the new circumstances they are faced with. Ultimately, Virgil looses his sight permanently, however we are given hope that both characters learned something valuable in the process.

There is a dog used throughout the movie in various scenes at Virgil's house. Virgil refers to the dog, "Jessie", as his seeing-eye dog, however he never actually leads Virgil. Most of the action consisted of the dog either laying on the bed or the couch, jumping down off the bed/couch, barking, laying on the floor, and in one scene, licking Virgil's hand. All of these scenes were very mild action, and the trainer accomplished them with a sit/stay command, a lie down command, and a sit/stay/come verbal command.

In another scene, after Virgil's sight has been restored, he and Amy are walking through a park in New York and Virgil is learning to identify different things. At one point, a dog on a leash with it's owner walks up to Virgil as he bends down to pet it, exclaiming "Amy, it's a dog!" The dog licks Virgil's face.

At the end of the film, when Virgil is blind again, we see him in New York with a new seeing-eye dog. There is one scene where Virgil walks down some steps and crosses a street with the dog leading him. They stop at a bench and the dog sits at Virgil's feet. After Virgil and Amy are reunited, they all walk away together. The action was accomplished by having the actor control the dog with a harness and leash. The trainer prepped the dog with the harness, so he was familiar with it. For the bench scene, the dog was placed in a sit/stay by the trainer and then was controlled by the actor with the leash as they walk away.