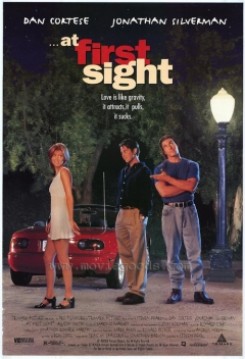 The premise of this film is exactly as the title implies. Throughout the film two guys actually are talking about girls. Len and Joe are best friends who tell each other everything. Joe is the ladies man, while Len is more of the shy reserved type. All women love Joe, and he can't seem to get enough of them. Lenny goes to Joe for all of his advice about women Our story opens with Lenny in a planetarium where he meets Rhonda, the girl of his dreams. Rhonda is also interested in Lenny, so writes her name and phone number on Lenny's hand. Lenny is excited but fearful that he'll do something stupid and ruin the relationship before it really gets started. Therefore, he calls Joe and asks if they can meet at a local coffee shop. Joe, being the good friend that he is, leaves his bed in the midst of lovemaking and goes to meet Lenny. What transpires next is the concept for a zany film.

There is a scene where Lenny climbs up the trellis to Rhonda's bedroom in the middle of the night. Expecting Rhonda to be in her own bed, Lenny naturally tries to awaken her. Whom he meets is Rhonda's dog, Paul, and Rhonda's grandmother. The grandmother, who is not completely in her right mind, starts talking to Lenny as if he were her long lost husband. Rhonda's father hears his mother talking and thinking she might need help, burst through the bedroom door with a shotgun. Prior to entering the room, the grandmother tells Lenny to hide under the covers. The dog, Paul, climbs up under the blanket on top of Lenny. The dog sniffs and licks Lenny's crotch. He then humps Lenny's leg and crawls up on his chest and sniffs and lick's Lenny's face. This action was accomplished with two trainers. The first trainer held the dog, while the second trainer, doubling for the actor, laid under the blanket and called the dog. As the first trainer released the dog, the dog followed a trail of food up to the second trainer's crotch. The dog then started licking the food. For the scene where the dog started humping Lenny's leg, the first trainer placed the dog in a down/stay position on the second trainer's leg. The first trainer, from out of camera range, then jostled the dog forward and backward from behind making it appear as though the dog was humping. For the scene where the dog licked Lenny's face, the first trainer placed the dog on the second trainer's chest and then baby food was placed on the second trainer's face, which the dog had been trained to lick off. A representative of American Humane was on the set when the dog action was filmed.