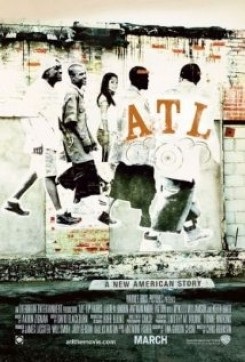 Set in an Atlanta neighborhood where hip-hop and competitive roller skating rule, ATL is the coming-of-age story of four teens struggling to find their place in the world as graduation looms. The film was loosely based on the experiences of producers Dallas Austin and Tionne Watkins, who, during their own adolescence, avoided the pressures of gangs, drug dealers, and violence by escaping to a southside Atlanta roller rink called Jellybeans.

In one scene, Marcus (Antwan Andre Patton, aka "Big Boi") shows off his pit bulls in a gated area of his yard. Anton (Evan Ross) carries a large bag of dog kibble that he pours into various bowls on the ground. The dogs were privately owned by a woman who raises pit bulls. As they were all from the same family, they got along very well and had no aggression issues. Doghouses and shaded areas on the set provided relief from the hot sun during filming, and the Safety Representative monitoring the production changed out the dogs as needed before they became too hot.

A police officer and his K-9 partner enter the school locker area in one scene, and the dog identifies a locker containing drugs. This professional K-9 action was accomplished with Sgt. Jason Deyette and "Ex", both active members of the Doraville, Georgia, police department.