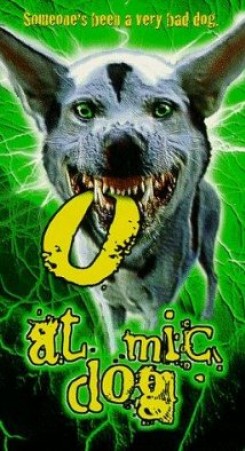 Atomic Dog is the story of a dog that becomes trapped in a nuclear power plant where the exposure to radiation causes him to become a wolf-like hunter of great strength and special abilities including infrared vision. He sires the dog of a local family, but after the puppies are born, he begins a quest to reclaim his offspring.

Dogs are used extensively throughout the film. In the opening sequence a puppy is seen laying on blankets in the power plant. The trainer placed the puppy and the set was disinfected to protect against disease. When the power plant is evacuated the puppy, Cerberus, is left behind and ultimately becomes exposed to high levels of radiation.

Some time later, a new family moves to town with their dog, Trixie. Trixie follows her teenage master as he drives off with some newfound friends. Trixie leaps onto the bed of the moving pick-up truck and tags along. For this scene the truck was stopped when the dog ran toward it and jumped onto the bed. Trainers gave the dog verbal commands and food rewards.

The teens drive out to the, now closed, power plant and while there spot a wild wolf-like dog, the fully-grown Cerberus, behind the gate. The animal growls at them and one of the boys takes out a gun and fires at the dog who runs off into the woods. The boy starts to track the dog. When the boy finally encounters the dog, the animal is high up on a fallen tree staring and growling at him. For this sequence, trainers cued the dog with verbal commands and used a plastic snarl device placed over the dog's nose, which lifts the dog's lips. This device is not at all uncomfortable for the dog, which is prepped to wear it. The device is used in severl scenes throughout the film. The trainer gives the dog a hissing command and the dog responds with a snarl. The snarling and growling behaviors are used frequently throughout the film and are always accomplished either with sound commands or food and bone rewards. In some instances the snarling or growling sounds are sound effects added in post production. When the gun was fired, no animals were present.

Trixie goes home with her owner, Josh, but Cerberus tracks her to the house and eventually jumps the fence, opens the doggie door and lets Trixie free. The two dogs trot off together down the driveway and out toward the woods surrounding the power plant. Trainers cued the dogs with verbal commands and gave them food rewards.

Trixie walks through the bush to get home, her hind quarters all bloodied as she staggers across the road, collapses and howls. This was non-toxic fake blood applied to the animal's coat by the make-up department. For the walk through the bush and all scenes shot in the wooded location, the path was cleared of all protruding branches, twigs and debris prior to filming. The trainer gave the dog verbal commands to walk slowly, head down, (it appears to stagger) and then cued the dog to lay down, (it appears to have collapsed). Using a food reward as incentive, the trainer is able to get the dog to lift her head and howl.

Trixie had been in heat and sadly dies giving birth to two puppies fathered by Cerberus. The puppies are seen suckling the dead mother. Trixie and her puppies are found by Josh and his sister, Heather, and the body of Trixie is carried home in a blanket by their dad. For this scene, two actual puppies were filmed at the home of their owner, suckling their real mother. The mother was placed on a piece of sterilized linoleum and sterilized dirt was sprinkled between the pups giving the impression of outdoors. The owner handled the animals and only one tight close up of the puppies was filmed and later inserted during the editing process. The dead dog in the blanket was a fake animal.

The puppies, Scamp and Lobo, are adopted by Trixie's human family and are seen in several stages of growth playing a tug of war game with a towel. The play behavior was natural to the dogs and encouraged by their trainers To match the adult Scamp and Lobo, seen later in the film, the puppies were colored using non-toxic dyes.

Cerberus, however is anxious to reunite with his offspring and stalks the house. Scamp and Lobo sense him and rush to the window, Lobo barks at Josh, jumping up at him and eventually Lobo attacks dad as he enters the house with a pizza box in his hands. Trainers using voice commands and food treats get the dogs to run A to B and to bark and snarl. To give the impression of Lobo attacking Josh and then Dad, the scene was filmed in cuts. The dog's paws were placed on the actor's shoulders by the trainer who then gave the dog verbal commands to speak or bark. This gave the impression of aggressive behavior. When Lobo attacks Dad, the dog was actually responding to a game command and trying to get a toy that was concealed by the box, and later, in the collar of a stunt double.

Because of the attack, the family takes the dogs to a veterinarian to be examined. Before the vet is able to inject Lobo, he tries to secure the dog with a catch pole. Cerberus breaks into the office and frees Lobo, attacking and killing the vet. For this scene, the trainer used both verbal and whistle commands to get Lobo to bark and react excitedly. Attacking the catch pole was actually play behavior instigated by the trainer. The trainer acted as a double for the actor during the attack scene and was on his back kicking his legs. A towel was at his throat and the trainer was merely playing the tug of war game with the dog. This appeared to be a vicious attack. For all the other scenes in which it appears as if the dogs are attacking people, it is trainers acting as stunt doubles and playing with the animals, using hidden treats or toys. The syringe that is held by the vet was merely the body of the implement with the needle removed.

One of the family's neighbors is a Professor of Biology and Josh goes to her for advice about the attack. Her home is filled with cages and animals she is studying. She is seen feeding a young cougar with a bottle. Experienced wranglers handled all of the exotic animals in cages and the actor was prepared by the trainer to carry the baby cougar. The animal was fed baby formula from the bottle. All other animals were cleared from the set when the cougar was being used.

They plan to track Cerberus and tranquilize him with a dart fired from a tranquilizer gun. During this sequence Lobo attacks them and is shot and killed. Throughout the film, any blood seen on the animals is actually an edible mixture of corn syrup and food coloring. The professor swipes at Lobo with the gun to ward him off however this scene was shot in cuts and the dog was not present when the action was filmed. The gunfire in the movie is also filmed without the dogs being present. The death scene was shot in cuts and the trainer gave Lobo verbal commands to lay down and stay. The dead body of Lobo is actually a synthetic stuffed animal.

After Lobo's death, Cerberus returns to the family home to find Scamp. The dog climbs a branch and leaps onto the roof and then through a window. For this scene, rubber runners were placed on the branch to secure the dog's footing. For the roof jump, carpeted scaffolding was constructed level with the roof and the gutters were blocked to avoid catching the dog's paws. A trainer lifted the dog onto the scaffolding for each jump. The dog was trained to jump through a fake window composed of cellophane, candy glass and balsa wood. Carpeted scaffolds were constructed level with the window on both sides for the dog to leap and land safely. Trainers were placed below the scaffolding as spotters and there was a trainer both at the departure point and the landing point. The trainer cued the dog with a verbal command and the dog leapt from point A to point B. The roof leap was approximately four feet and the window stunt was approximately three feet.

Cerberus comes back again and this time traps Scamp in the garage by pulling a rope that slams the door closed. This sequence was a series of learned behaviors consisting of the dog picking up the rope and pulling it while the trainer gave verbal commands.

Cerberus senses that Heather is a sympathetic human and leads her back to the power plant. The family, along with the professor and Scamp, track the dog in an effort to rescue the child. The battle ensues at the plant where Cerberus is shot with a tranquilizer, but manages to pull the dart out of his leg. Cerberus and Scamp fight, but Cerberus eventually dies, pinned under large girders that fall on top of him.

In this last sequence, Scamp is seen crawling under a chainlink fence to enter the power plant property. For this scene, a hole was dug prior to filming to make it easy for the dog to scamper underneath. No sharp edges or protrusions were exposed on the fence. All grating floors in the power plant were covered with rubber matting as a safety measure to prevent injuries to paws. Gunfire during this battle sequence was accomplished with either quarter loads or paint balls. The paint balls are gelatin capsules that were fired well away from the animal. The dart was fake and applied to a prosthetic patch made of leather and fake fur that was then applied to the dog. The dog removed the dart after being verbally cued by the trainer.

For the dog fight scene, the animals were merely engaged in play behavior and very well accustomed to being with each other. After the fight, the girders fall from above crushing Cerberus. For the filming of the girders falling and landing on the dog, a fake dog was used. No live animals were on set when this was filmed. For the effect of Cerberus dying beneath the fallen girders, the girders were bolted together leaving an open spot beneath that was covered with a mat and easily accessible for the dog. The trainer verbally cued the dog into position and to stay in a lay down. There was no actual contact with the girders. Scamp mourns the death of his father by licking the face of Cerberus. Baby food was placed on the face of the dog for the other dog to lick off.