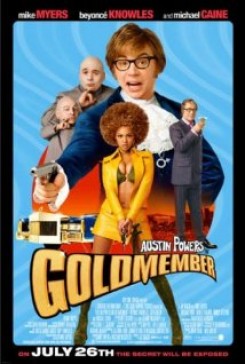 Shagadelic man of mystery Austin Powers (Mike Myers) returns in Goldmember, ready to battle a 14 carat nemesis, flirt with a new bevy of beauties, including disco hottie Foxxy Cleopatra (Beyonce Knowles), and deal with some major daddy issues. Dr. Evil is back with issues of his own, including the defection of a key member of his evil posse.

Hairless wonders Mr. Bigglesworth and Mini-Mr. Bigglesworth are briefly held in several scenes. Three Sphinx cats shared the coveted roles, with the adult part going to Ted Nude-gent and Mel Gibskin, and the mini role belonging to three month-old Grogg. Trainers instructed the actors on how to gently handle and hold the animals and wrapped them in a blanket for comfort between each take. The cats were taken off the set when any explosives were used.

During a flashback sequence, a 12 week-old white Persian kitten named Chloe played the role of baby Mr. Bigglesworth. A trainer handed the kitten to the young actor to hold during the scene and retrieved it afterwards.

Several kitty scenes ended up on the cutting room floor, including a sequence on Dr. Evil's submarine in which adult Mr. Bigglesworth and Mini-Mr. Bigglesworth are outfitted in tiny feline life-preservers. Trainers dressed the cats in custom-fitted nylon vests and handed them to the actors to hold during the scene. In another deleted scene, a panicked baby Bigglesworth, played by Chloe, leaps into an actor's arms. A trainer gently tossed the cat to the actor from off-camera approximately four feet. A stuffy cat was also used in a deleted scene that had baby Bigglesworth attacking her owner.

Dr. Evil's shark tank was actually filled with fake, mechanical sharks. The fish in the background were also fake.

A Knight Without Armour

A small dog sits next to the Queen during Austin's knighting ceremony. Two Welsh Corgis named Twiggy and Travis shared the part of royal pooch, and were instructed to stay on their mark by their trainers. Although omitted from the film's final cut, the dogs also got to "attack" a guardsman's shoe and play a game of tug-of war. Trainers prepped the dogs on how to play with the shoe ribbon by pulling and cued the animal to start from off-camera.

On a computer screen, a monkey is seen falling off of a log. This was stock footage and not filmed specifically for this production.