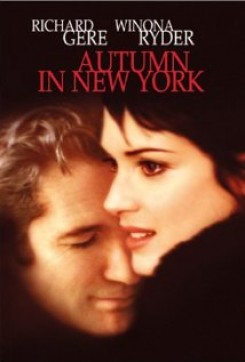 Autumn in New York is a drama about a young woman, Charlotte, who falls in love with a man who is twenty years older than she is. Will is known as a womanizer and Charlotte is looking for true love. They begin to date and will begins to fall in love with Charlotte who is very different from his past girlfriends.

During the scene where Will walks in the park with his friend, Lynn, we see two different people walking dogs on leashes. The trainer positioned the dogs on leashes with the actor's who walked them. In another scene where a couple approach Will's apartment, we see a man walking a dog on the leash past them. The trainer doubled as the actor for this scene. In the beginning of the film there are some birds flying in their natural habitat as the camera shows us different shots of the city. In another scene several birds are shown flying as the camera pans up Will's apartment building. A trainer stood on either side of the camera and held a release box containing ten pigeons. The homing pigeons were released on cue and circled upward. At the end of the film, Will and his family are in a row boat on the lake. We see swans swimming and snuggling in the water nearby. The trainer released the two swans who were a "mated pair" and naturally snuggled into the lake. Boats with crew members and the trainer surrounded the rowboat to discourage indigenous birds from joining the scene. The trainer retrieved the swan actors when the scene was over.