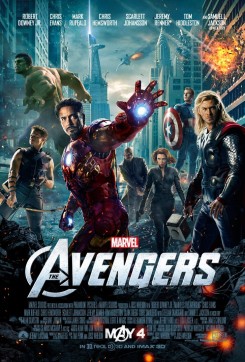 The legendary Nick Fury and his agency bring together super heroes to form the Avengers in order to save Earth from the super villian Loki and his army.

In the scene that's supposed to take place in Calcutta and we see two goats tied to a fence and chickens roaming free in front of a shack, wranglers tied the goats to poles, while on action they let chickens roam free. On cut, the trainers gathered the chickens and put them back in their crates.

In the scene where we see two birds fly above the mountain tops, the birds were actually CGI.