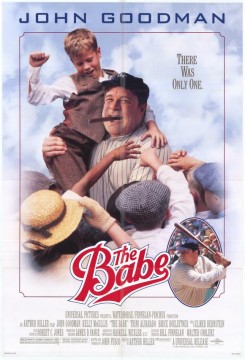 The Babe is a candid account of the life of Babe Ruth, warts and all, from childhood poverty to his rise as one of the greatest ball players of all time and then his descent when his talent and health begin to fail. In 1902, at the age of seven, his father abandons him after placing him in a Catholic Boys School because the boy is "incorrigible". It's rough and the other boys tease him about his weight until he plays baseball. His skill with a bat is so extraordinary, a priest describes it as a miracle. At age 19, the owner of the Baltimore Orioles adopts him so that he can leave the school and save the Orioles from a losing streak. Shortly afterward he's sold the Boston Red Sox where he quickly becomes a major player. He is crude and vulgar but he's making big money and becoming a major league womanizer. The one woman he most desires, Helen is sweet, gentle and very much a lady. She won't give him a tumble but he pursues her relentlessly until she surrenders. Babe can't do enough for her, and because she loves animals, he buys her a farm. Helen is happy on the farm but Babe is restless and longs for the action of the city. When he's sold to the New York Yankees, Helen tries to adjust, but it's too difficult and she moves back to Boston. On his own Babe's life is one endless round of drinking, eating and womanizing and Helen leaves Babe calling him "incorrigible". It's a low point in his life and when his batting suffers, even his fans turn against him until he meets Clara, a beautiful actress who helps him regain some of his former glory.

Animals are primarily atmosphere such as ducks on a pond, a dog, a cow and other farm animals. Horse drawn carriages are visible in several early scenes. When Babe begins to make big money he buys a motorcycle and nearly collides with a horse and carriage. There was no contact with the horse. This scene was staged so that the motorcycle was not going fast and did not come too close to the horse and carriage. When Helen and Babe first visit the farm she holds a chicken and feeds it. Feeling guilty about his behavior, Babe buys Helen a gift, a pair of horses which are led down a ramp off of an old fashioned horse trailer.