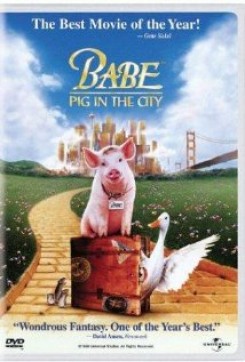 Babe: Pig in the City

Babe: Pig In The City is the sequel to the lovely tale about Babe, a pig who believes he is a sheep dog. Babe and Mrs. Hogget travel to the city in hopes of saving the farm from being taken by the bank. Babe encounters an array of new animals throughout his city adventure.

Both the first film, Babe, and the sequel Babe: Pig In The City, were filmed entirely in Australia. The majority of the animals in the film were housed in specially-designed facilities at the Fox Studios, where most of the sets were built. The remaining animals were housed at Robertson, which was the Australia location of the Hogget farm.

Pre-Production began on the film in October 1996 with the trainers Karl Lewis Miller and Steve Martin. Karl Miller was the animal trainer/supervisor on the first Babe film. Babe was a large white Yorkshire pig. The Jack Russell Terrier seen in the film was a healthy dog owned by Mr. Miller. The youngest member of the simian family was Easy, an 18-month-old chimpanzee owned by Mr. Martin.

The Singapore Zoological Gardens loaned the male orangutan, Mitra, to the production. Mitra's sister, Mia, traveled with him so he would never feel lonely. The capuchin monkeys were from Las Vegas and the other chimpanzees came from Mr. Martin's own compound in Southern California.

Caroline Girdlestone and James Delaney, New Zealanders who handled the sheep in the original Babe assembled the barnyard animals. On the first day of production, the animal count was 799. This was the exact amount, which existed on the last day of shooting for the first Babe film.

Mr. Miller arrived in Sydney early in pre-production with a staff of over 70 locals. More than half of the team were students of Mr. Miller's who had worked on the first Babe film. A minimum of two units filmed daily. The trainers used voice and hand commands with food as a reward.

All of the dogs in the film that where found at animal shelters found homes with the cast and crew.

According to the Royal Society for the Prevention of Cruelty to Animals and the animal trainers, no animal was harmed in the making of this film. Animatronics, prothestic animals and SPFX were used to simulate all scenes, which seemed to place the animal in jeopardy.