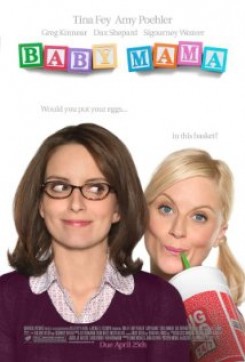 Kate (Tina Fey), a 37-year-old single businesswoman, has made many desperate attempts to have a baby. When she finds out she is infertile, she decides to hire a surrogate (Amy Poehler), a trashy woman who turns out to be hiding a few secrets.

As Angie (Amy Poehler) approaches Carl's (Dax Shepard) car, a woman in the background walks her leashed dog across the street and onto the sidewalk. Later, a different woman walks another leashed dog down the sidewalk as Angie and the doorman sit on the outdoor steps. For these brief and mild scenes, the actors walking the leashed dogs were the actual owners of the dogs. An American Humane Animal Safety Representative stood off-camera, and the dogs were rested and rewarded between takes. The streets were closed off to traffic.

When Kate (Tina Fey) first walks into Angie and Carl's apartment, an iguana is in the foreground, sitting on top of its cage. For this brief and mild action, which took place on a secured indoor set, the trainer removed the iguana from its travel crate and positioned it on top of its usual cage. Collard greens were placed in front of the animal to entice it to eat and stay, which it did.

Moments before Angie and Karl drive up to Kate's building, a bird walks across the street. This bird was in its natural habitat and coincidentally caught on film.