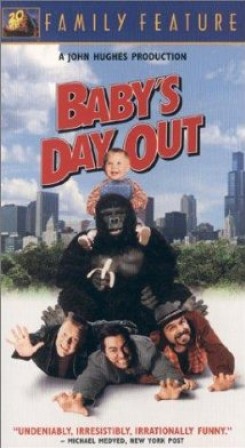 Baby's Day Out is a comedy about the son of a very wealthy family who is abducted by bungling kidnappers and leads them on a merry chase around town and through the zoo. Baby Bink, as he is fondly called, has a nanny who constantly is reading him his favorite book, Baby's Day Out. When his mother decides it is time for Baby Bink's first portrait, she hires a photography studio to come to the mansion and do the job. However, the photographer's truck is stolen by three stupid thieves who pose as the photographer and his staff and kidnap Baby Bink for ransom. Fearless Baby Bink, once out of the protective mansion, escapes the foolish criminals and embarks on an adventure, visiting all the places from his favorite book and continually outsmarting the crooks. When his nanny sees the pattern left by the sightings of a "lone baby" and the wake of slapstick catastrophe that follows him, she realizes he is living his favorite adventure and leads the police and his parents right to him. Baby Bink then leads the police to the criminals, who are still in possession of his favorite book, or "boo", as he calls it.

Baby Bink first escapes his captors when one of them falls asleep reading him his book and the baby follows a pigeon out the window and over the rooftops to begin his adventure. There a sequence of scenes featuring the pigeon first sitting on a window ledge, then perched on a rooftop skylight, and then on the edge of a plank joining two rooftops. Other pigeons are seen in a shot of the billboard that will eventually be the landmark Baby Bink recognizes to capture the thieves. These scenes were shot in cuts and when put together with the shots of Baby Bink crawling after it, give the appearance that the baby is following the pigeon. All of these scenes were shot on a sound stage using trained pigeons which responded to a trainer's clicker commands.

After Baby Bink gets on the "Big Blue Bus" as in his book, he goes into a department store, then into a taxi cab, and finally gets to the zoo. There is a shot of a giraffe in his habitat as background establishing the zoo location. Baby Bink makes his way into the monkey house and actually into the arms of a protective gorilla who acts as a bodyguard for the baby, further foiling the inept kidnappers. In this series of scenes there were some chimps in cages that were actually zoo habitats. The gorilla, however, was an actor in a gorilla suit.