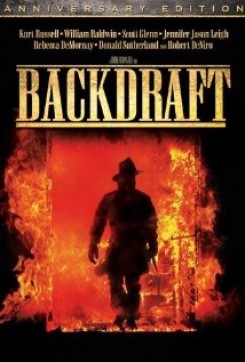 Backdraft is an action-packed story about life in a family of firemen. After witnessing the tragic death of his father in a fire, Brian is emotionally scarred and has difficulty finding the right job. He had wanted to become a fireman like his father and older brother Stephen, and finally makes the same commitment. After graduating from the academy he's assigned to his brother's crew. There's much sibling rivalry between the two and Brian constantly has to prove himself to Stephen who thinks of Brian as his irresponsible "little" brother. Stephen manages to brow-beat him off the team. Feeling incompetent, but determined to continue in his career, Brian joins the fireman's investigations force. His first assignment is to investigate a series of arson fires involving "backdraft", (when fire is trapped in an enclosed area and air enters, the fire explodes into a ball of flames!) Backdraft is a fireman's worst fear and several firemen have been killed in these suspicious fires.

After one of the fires, Brian and his captain examine the rubble and find two dead rats. Although real dead rats were used, they were not killed for the sake of the movie. The rats were obtained from the City of Chicago Rat Abatement Program.

The firemen have a mascot called The Thing. The Thing is a Hungarian Komondor dog who appears in two scenes.

In one scene, after one of the explosions, three dogs are seen barking at a dead body that had been blasted through a car window. In another scene the firemen help an over-turned truck which had been carrying crates of chickens. Approximately 12 crates and 30 chickens were used in this scene. The chickens had been provided by a slaughterhouse and were well contained and cared for during production. After filming, the chickens were returned to the slaughter house. One of the chickens received a broken leg as the result of an actor accidentally stepping on the chicken. American Humane representative Robyn Douglass was on the set and is sure that this was and unavoidable accident.