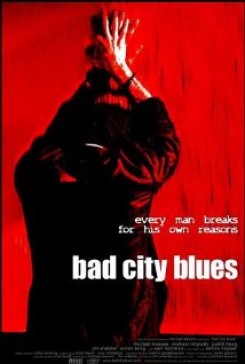 Bad City Blues is a film noir first effort from Director Michael Stevens. The crime story takes place in New Orleans, where a corrupt police captain leans heavily on a washed up doctor, Eugene Grimes, to lead him to some ruthless bank robbers and murderers.

Throughout the film, Dr. Grimes has flashbacks of a deer-hunting incident from his childhood. In one of the flashbacks, the deer appears to be lying wounded in the snow. The boy stands over the dying animal, lifts his rifle and appears to shoot the deer at close range. The animal is then very still in the snow with the boy filmed kneeling next to his kill.

For this scene a deer was tranquilized so that it would lie still. This was a violation of American Humane Guidelines that state "General anesthesia and sedation on set and/or for the sole purpose of film making is prohibited." Any time an animal is anesthetized, there is risk to the animal and although this may be necessary on occasion for medical purposes, it is not an approved practice for the sake of entertainment.

The production was in receipt of the Guidelines before filming began and was advised by AHA that the scene with the deer would require a fake and/or animatronic animal. Several professional trainers were consulted and advised production that a live and fake animal would be necessary to film the sequence in order for the production to be in accord with AHA Guidelines which are industry standards. Production failed to notify AHA of the correct location and schedule for filming of the scene and was aware that tranquilization of the animal was a violation AHA's Guidelines. The deer safely recovered.