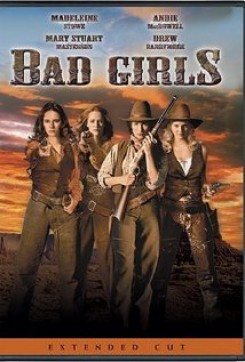 Bad Girls is an old-fashioned shoot-'em-up Western with a gender twist. Instead of Wyatt, Sundance, Doc, or Billy, the plot focuses on the exploits of four beautiful women as they struggle to survive in the hostile, male dominated Old West.

The story is set in the late 1800's and begins in a Colorado saloon where prostitutes entertain their clients in upstairs bedrooms. When a sadistic client brutally beats Anita, another prostitute, Cody, shoots and kills the man. Justice is swift, and Cody is about to pay for her crime with a public hanging. As Cody sits atop a horse with a noose around her neck, from out of nowhere, Anita appears, driving a buckboard, scattering the crowd and rescuing Cody. As they ride off, they are joined by the other prostitutes and they leave town in a cloud of dust.

The women are headed for New Mexico where Anita has her life savings in a bank. She plans on investing the money in a legitimate business so that the four women can start a new life. Unfortunately, the widow of the murdered man has hired Pinkerton men to track down Anita. Just as Anita is about to collect her savings, the Pinkertons arrive. While the Pinkerton men confront Anita, the bank is held up by Kid Jarrett, who makes off with not only the bank's money, but the women's too. The women resolve to get it back anyway they can.

Horses are seen throughout the film, either as background pulling wagons or being ridden. The scene where Anita comes to Cody's rescue, was shot in cuts. A stunt woman, who was an expert at handling a horse drawn wagon, doubled for the actress. Stunt women also doubled for the other actresses who made their fast escape on horseback.

There is a scene where horses pulling a wagon are spooked by the sound of a rattlesnake and the horses run off with a seemingly empty wagon. This scene was shot in cuts with the rattlesnake being filmed separately from the horses. The horses pulling the wagon were actually being guided and controlled by an unseen driver inside the wagon. A rubber snake was used for the dead snake which the women later roast over a campfire.

After robbing the bank, Kid Jarrett rears his horse and rides out of town. A trained rearing horse performed, cued by a stuntman who doubled for the actor. As the women try to make their escape, one of them attempts to mount a horse, but the horse rears and tosses her to the ground. Again, this was a trained rearing horse who was cued by the stunt woman who doubled for the actress. Kid Jarrett and his gang ride their horses down a steep hill into a shallow river. The steepness of the hill was exaggerated by use of camera angles.

When one of the women is jailed, the other women aid her escape by having two horses pull out her jail cell window. The window was actually rigged so that it was not difficult for the horses to pull it away from the wall.

In an ambush scene involving Kid Jarrett, his gang and the women, the road blows up in front of a horse drawn wagon. There are several explosions and gunfire. This scene was shot in cuts and was achieved without the use of any real explosives near horses. Air mortars blowing fuller's earth created the illusion of explosions and dust was blown away from the animals. The sound of explosions and gunfire was added in post production. When one of the women leaps over a wall on horseback, a stunt woman doubled for the actress and a trained jumping horse was used.

In other animal action, pigs are seen in an enclosed yard. In a later scene, a man is shot an falls into the pen with the pigs, as the pigs scatter out of his way. A stunt man did the fall and there was no contact between the man and the pigs. Cattle are seen in the background of a ranch and chickens range freely in a town.

American Humane was represented on set in the Northern California location by the Tuolumne Humane Society. Midland Animal Control was on set for the Texas filming. American Humane guidelines were followed throughout. There was an accident that happened, however, during a hiatus in the production. A mule escaped from his pen, ran onto the highway and was killed. Since this had nothing to do with how the animals were treated during the production of the movie.