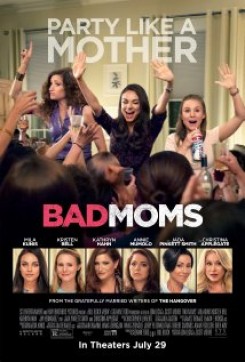 Three middle-aged mothers are pushed to the brink and let loose like teenagers.

In the scene where the actress drives the car and the dog sits in the passenger’s seat, this scene was shot on stage, and the dog hat a collar and leash on him at all times.

In the scene where the actress parks the car in front of the house with the dog in the front seat, she gets out, and carries the dog into the house, the actress was shown how to drive the car before shooting the scene. On action she drove fifty feet and stopped at the curb. In the next scene, the actress got out of the car holding the dog, walked to the front door, where the dog’s trainer took him from her arms.

In the scene where the woman drives the car and the dog wears a bicycle helmet, prior to filming the trainers placed an animal friendly helmet on the dog’s head. The strap was modified so it could be tied tight and the top of it was filled with soft paper and foam to raise it over the brow line. Fernie pads were also added to seat the floorboard of the car. The coffee spilled on the actress was cold, so the dog was never in danger of being burned.

Due to late notification and/or limited resources, American Humane Association did not monitor some of the dog action.