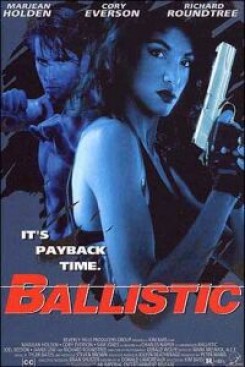 Ray, a former police officer, was framed by his corrupt captain and sent to prison on a false charge. His daughter, a tough young undercover detective, has been dutifully visiting Ray and trying to uncover evidence to free him.

She is an excellent cop and receives an award for meritorious conduct from the mayor. However, she is framed by two of her fellow officers and her captain, the same crew that plotted against her dad.

Ultimately, she is able to obtain her father's release from prison. Her boyfriend joins her and her father, and the three of them attempt to bust the bad cops and clear her name. In the process they discover the bad cops are in league with a major drug and arms dealer.

There is animal action in one scene where a rat scurries past some red ants in a back alley. American Humane did not receive a script and was not on the set. We received a call from someone on the set saying that red ants had been placed on the rat and had they been bitten several times. The trainer informed us that the scene was shot several times with the rat running past the ant hill. He stated that the production company then asked him to have the rat run over the ant hill, and in the process, the rat was bitten on the tail, so he informed the production company that he would not let his rat do this a second time. The movie only shows the rat running past the ants. Since we can not determine if the ants were intentionally placed on the rat, or if they accidentally got on the rat as he ran across the ant hill.