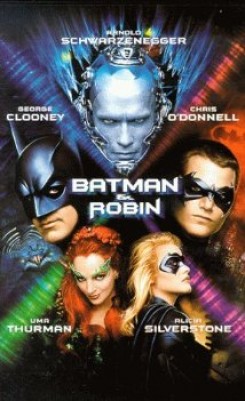 Batman and Robin is a film about the capped crusaders battling the villains, Mr. Freeze and Poison Ivy. Mr. Freeze, with the help of Poison Ivy, has frozen the city of Gotham and it is up to Batman, Robin, and Batgirl, Alfred's niece, to thaw the city. Animal Action:

When Mr. Freeze is terrorizing the city with his freezing gun, a dog is seen lifting his leg on a fire hydrant. While relieving himself, the dog is frozen by Mr. Freeze. Later, Batman thaws everyone out and the dog is seen shaking his body and then walks away. For this scene a real and a fake dog were used. Water was sprayed on the ground along with dry ice 4 feet behind the dog. The trainer placed the dog on his mark and applied two handfuls of crushed ice on his back and head, then cued the dog to shake. The dog walked to his trainer out of camera range and was immediately dried with towels. A fake frozen dog was used for the shot of the dog after Mr. Freeze zapped him with his freezing ray.