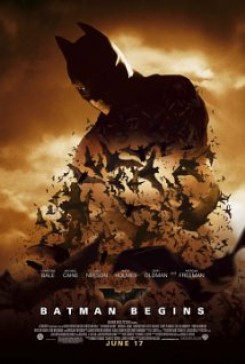 As a child, Bruce Wayne was an eyewitness to his parents' murder, making him forever obsessed with avenging their deaths. Following an extended tutelage in the Far East under the ninja leader Ra's Al Ghul, Bruce returns to Gotham City and finds the now-decrepit city overrun by mafiosos. After discovering a cave under his mansion – along with an armored suit – Bruce assumes a new crime-fighting identity bent on taking out the evil scum that plague the streets of Gotham City.

Although bats appear several times throughout the film, only one scene features real bats; the rest were computer-generated images (CGI). Real bats are first seen in a recurring flashback of Bruce as a child; the boy sits outside and some bats fly in the foreground. This animal action was filmed on a closed set in front of a blue screen, and trainers brought 20 bats to the set so they could alternate the animals for different takes.

During filming, trainers released four bats at a time. These bats were trained to fly to two perches set up just out of camera range. However, some of the bats preferred to land on the trainers' arms instead, so handlers used their outstretched arms and became human perches! All bats were collected, rewarded with pieces of banana, and returned to their cages after each take.

Trainers had met with the cast and crew before filming this scene to explain how the action would be achieved. This special session fascinated the crew and provided the bats with some additional rehearsal time. These same bats were also used in another American Humane-monitored production, Harry Potter and the Goblet of Fire, to be released later this year.

In one shot, mounted policemen ride through a recent crime scene and cross a bridge. Ten horses were used for this action, with wranglers doubling as the actors. All the horses were shod in rubber shoes for optimal traction on the pavement, and wore leg wraps for added protection. Smoke machines were set up in compliance with American Humane's Guidelines, and additional smoke effects were added during post production.

As the sequence continues, "Scarecrow" (Cillian Murphy) rides up to Rachel (Katie Holmes), and his horse drags a body alongside it. The horse stops, rears up, and spews fire from its mouth until Scarecrow is hit with a taser gun. The horse then runs off with Scarecrow slumped over the saddle.

Three different horses, each with a distinct talent, were used in this scene. The first part of the action was filmed using a carriage horse accustomed to pulling significant weight. A stuntman was attached to the horse via a padded harness equipped with a quick release latch, in case the man needed to bail out for any reason. According to American Humane's Certified Animal Safety Representative monitoring the set, the horse appeared to have no difficulties pulling the stuntman and the quick release feature wasn't used.

The second part of this scene required the use of a specially trained rearing horse, which performed on its trainer's command. Fire blazing from its mouth was a special effect added in post production. The third horse was trained and accustomed to running with a limp, mounted rider. For this action, an off-screen trainer directed the animal and retrieved it at its end mark.

The fish that appear in an aquarium at Jim Gordon's office were purchased and maintained by a local pet store in London. One of the crew members adopted the fish after filming wrapped.

The maggots that climb out of a mask in one scene were CGI.