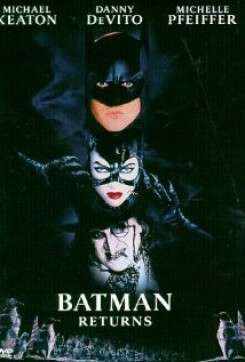 It's Christmastime in Gotham City, and in the heart of the city, The Plaza, there's much excitement as the people await the annual lighting of the Christmas tree. The Mayor arrives with city officials and honored guests for the special ceremony. One of the guests is Max Shreck, a tough, shrewd and ruthless businessman, who speaks to the people of peace and love. The festivities are interrupted when an enormous gift-wrapped package arrives and rolls forward. As everyone stares at it in anticipation, the package erupts like a Trojan horse, spewing forth an assortment of circus characters who launch a spectacular attack on The Plaza. The mayhem escalates until Bruce Wayne, in the guise of his alter-ego, Batman, intercedes. One of the victims Batman rescues is Max's secretary, Selina, a mousey wimp of a woman. Selina continues home to her lonely apartment where her only companion is her pet cat, Miss Kitty.

Unnoticed in all the confusion, Max has been abducted by the attackers and taken underground to the realm of The Penguin, a man with penguin-like features. The Penguin rants and raves how he is angry at the toxic waste that Shreck's various industries have produced in the environment. He states that he wants to find his real roots - to find who his parents are. What he really wants is power, which he will achieve by running for Mayor of Gotham City. He blackmails Max into helping him achieve his goal.

In the meantime, Selina returns to Max's office where she had forgotten to prepare background material for Max's meeting with Bruce Wayne. While doing her research, she uncovers some incriminating information on Max's new power plant. Max returns to his office and realizing Selina could be a threat to him, he pushes her through a glass window, where she falls, presumably, to her death below. As she lies dying on the snowy street below, in her delirium she summons Miss Kitty, who appears with a rescue team of many cats and they perform a strange form of feline CPR. They revive Selina, but there is something different about her. As if in a trance, the dazed Selina returns to her apartment where she transforms herself into Catwoman. Victim no more, as the predatory Catwoman, she seeks her revenge on Max and society. As Selina, and feigning memory loss from an accident, she returns to the office of a surprised Max where she meets Bruce. Bruce is attracted to her and a romance develops.

As Bruce and Selina, they become lovers, but as Catwoman, she becomes Batman's seductive nemesis. She is but one more villain on Batman's growing list of evil-doers. Batman has his work cut out for him as he battles to save Gotham from the forces of evil.

There's extensive use of a large variety of animals in Batman Returns. American Humane was present throughout the filming of all animal action and, in addition, monitored training for animal stunts performed in the film. AHA also examined the costumes worn by the penguins and the monkeys prior to filming. Our representatives also inspected the housing for the animals prior to production. The penguins had a 24-hour guard and were housed in two forty-foot trailers at night. Each trailer had a swimming pool with a filtration system and were temperature controlled. Outside there was a 2,000 gallon pool, also with a filtration system and netting over it to keep the dust out. When filming, the temperature was kept extremely low on the set, so low that our representatives on the set had to wear winter overcoats in order to be comfortable. A newspaper reported the producers' total refrigeration bill for keeping the penguins comfortable totalled one million dollars! Provisions also were made on set for the comfort of the animals that required warmth.

An opening scene is a flashback to when the Penguin was a baby and shows a pet cat walking past a darkened cage, which supposedly houses the infant Penguin. The cat walks from A to B and stands by the cage, suddenly it disappears as if it's been sucked through the bars and into the cage. (Supposedly the cat has been killed by the infant Penguin.) The cat merely walked A to B, then the film cut to a fake cat which was pulled through the cage.

In the attack on the Plaza, a variety of animals are seen. There are policemen mounted on horses, which are primarily background. A monkey wearing a costume and holding a fake gun, sits on an actor's shoulder. A ratty-looking poodle wearing a sweater was also in this scene. The poodle's fur was made to look unkept with the use of non-toxic make-up. In addition, fake fur was added to the poodle's head and body. Because the set was kept at a very low temperature, the monkey and the dog were comfortable wearing their costumes and, between scenes, were warmed by heating pads, which were kept on the set. A snake which was draped around the neck and shoulders of an actress, was also in the scene of the attack by the circus people. Extra provisions were made to keep the snake warm between scenes. Most of the loud sound effects, including the sound of gunfire, were added in post production.

When Miss Kitty, the cat, is first seen in Selina's apartment, the action is very simple A to B in nature and the cat simply responded to her trainer's cues. For the scene in which Selina falls from the window and is revived by Miss Kitty and various other cats, 20 cats were used. To achieve the effect of the cats rushing to Selina's aid, several handlers released the cats from kennels simultaneously. The actress clicked a clicker with her hidden hand and the cats responded to the clicker and small bits of food, which were hidden around her. Later when the transformed Selina returns to her apartment, numerous cats enter her apartment through her window. The trainer gave verbal cues to the cats to jump into the room. In a separate scene, cats are seen on a ledge outside her building. The cats on the ledge wore harnesses, which were attached to hooks on the ledges to secure the cats and to keep them from slipping.

There is a scene in which the ratty poodle carries a grenade into a building and then exits without the grenade and shortly thereafter the building explodes. The dog ran A to B with a fake grenade in his mouth. He dropped the grenade and ran from B to A. This was accomplished with the use of two trainers. One released the dog at Point A to go to another trainer at Point B. The trainers used both hand and voice commands. The scene was shot in cuts and the dog was not present during any explosion.

In a scene between the Penguin and Catwoman that takes place in the Penguin's bedroom, a small bird is in a cage. Catwoman threatens the Penguin by putting the Penguin's pet bird in her mouth, threatening to eat it. The Penguin in turn holds a knife to Catwoman's cat which is sitting on the bed, so Catwoman spits out the bird and it flies out and away. To accomplish the scene with the bird in Catwoman's mouth, the bird was gradually and carefully prepped for the scene, starting with teaching the bird to fly out of closed, cupped hands and then fly from the hands to his cage. Gradually the bird was placed into the open mouth of the trainer. Eventually the trainer closed his lips for a second, then opened his mouth and the bird flew to his cage. The trainer did not close his lips tightly but kept them open slightly.

When the scene was done with the star actress, the scene was shot in cuts. With the cameras rolling, the trainers backed the bird into the actress' mouth. The bird was in her mouth for one or two seconds, then she opened her mouth and the bird flew to his cage. The bird had been well-trained by this point and the action did not bother him. The bird that was used was a finch. A fake bird had also been used in part of the scene prior to the point where Catwoman places the bird in her mouth. When Catwoman first reaches into the cage to take out the bird, a fake bird was used. She pulled out the fake bird and popped it into her mouth. Then the camera cut to the part where the real bird was placed in the actress' mouth. The cat that was present laying on the bed during this scene was tethered to the bed by a soft cotton string that was tied like a belt around the lower waist of the cat. This was not seen by the camera. The cat was also filmed separately without any tether. The Penguin pressed a button on his umbrella and a knife came out of the point. This was a fake knife which he held to the cat. The cat was not released until after the bird was safely in it's cage.

In the spectacular climax where the Penguin summons his army of penguins to march on Gotham, Twelve King penguins and twenty-four Black-foot penguins were used. The penguin army was multiplied optically to make it appear that there were many more penguins. The penguins wore specially fitted harnesses, to which they had become gradually accustomed to wearing. Fake rockets were attached to the harnesses. The helmets were light weight and had elastic bands attached to them to hold them on. There were rubber tips on the rockets to protect the birds against being harmed by any sharp points. The penguins would be released by one group of trainers and called from Point A to Point B by another group of trainers. Puppy pens were used to keep them in a specific area. The trainers kept a bucket of fish and would continually feed the penguins in order to coax them to move to certain positions. Trainers, of course, were always out of camera range. At one point 30 penguins swam across their special pool wearing their harnesses. They had been properly prepped for this action and were comfortable with it. The flooring of the various other surfaces that the penguins walked across had all been carefully prepared for them. The sound effects of gunfire and explosions were added in post production and no explosions were close to any real birds.

The six Emperor penguins that act as pallbearers for the Penguin's body at the end of the film, were little people dressed as Emperor penguins. Monkeys and poodles also appeared in the climactic scenes. At one point Max, who is locked in a cage, calls to a monkey who has the key to his cage and the money goes to the cage with the keys. The keys were actually tied to the monkey and the monkey was tossed by one trainer to another trainer a distance of about one half foot. Where the monkey carries a note down a flight of stairs to the Penguin, the monkey was simply coached by his trainer with verbal cues.

In other animal action in the film, bats which appear on camera were not real, but computer generated special- effects bats. A dead fish that Max holds up to the Penguin was actually a fake prop. An aquarium containing fish are background in Bruce Wayne's mansion.