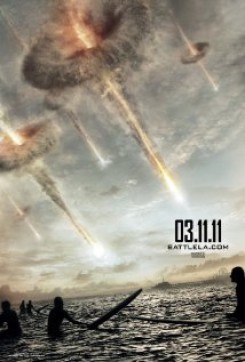 After an alien invasion has wiped out major cities, a military unit enters a neighborhood to try to save civilians and fight the aliens, who are almost indestructible.

After soldiers shoot at what they think is movement, a German shepherd dog walks out from between two parked cars, dragging his leash behind him. The men pet him and check out his tags/collar moments before the aliens ambush them with explosions and gunfire. This was filmed in separate shots — the dog was not present for any of the gunfire or explosion. An off-screen trainer cued the dog to walk from its starting point (between the parked cars) to the men, and then out of frame. The well-trained dog was unfazed by having its leash drag behind him for that short walk. The smoke in the air was a non-toxic special effect that did not bother the dog or people. All grounds were inspected for hazards, and sets were closed off and secured. Cast and crew members were introduced to the animals and instructed on their proper handling.