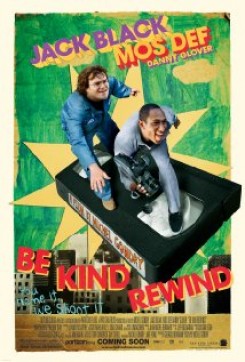 When bumbling klutz Jerry (Jack Black) becomes magnetized in a power plant accident, he unwittingly erases all the movies in the VHS-only video store his friend Mike (Mos Def) works in. So when a loyal customer wants to rent several movies she's never seen before, Jerry and Mike decide to remake them in home-video fashion.

During the remaking of Ghostbusters, a cat jumps out of a refrigerator and onto the ground. Mike (Mos Def) and Jerry (Jack Black) then wave tools at the cat. This scene used a cat named Buster, who was well-trained to sit and stay. A trainer placed Buster onto a secured shelf inside the prop (room-temperature) refrigerator for a few seconds and then cued him to jump out and onto the floor. The cat was well-rehearsed for this scene. When the actors appear to wave tools near the cat's face, trainers instructed the actors how to keep from bothering Buster with this mild action.

Several birds fly over a building. These birds were filmed naturally in their own habitat.

Be Kind Rewind does not carry the disclaimer at the end of the film because the production did not give American Humane a pre-release screening of the film, which is one of the requirements for issuing the disclaimer.