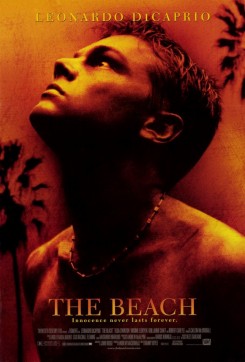 Unwilling to accept the mundane comforts of the familiar, Richard (Leonardo DiCaprio) travels to Bangkok for adventure and the unknown. Yet he soon tires of the dark, Bladerunner-esque city and again finds himself seeking something new and exciting. Richard's quest leads him to a remote island paradise where he discovers that the "pursuit of pleasure" isn't all it's cracked up to be.

While in Bangkok, Richard drinks snake's blood on a dare. Poised in front of the coiled, caged animal, he downs the blood as the snake snaps at him from behind the glass. Later, Richard will perform a similar act when he picks up a worm and places it on his tongue, appearing to chew and swallow. Back at his hotel, roaches scatter across his dingy hotel room floor.

On the island, underwater shots of exotic fish and various sea creatures contrast the depravity of city life. Unfortunately, there are several scenes involving spearfishing, an activity vital to the survival of the island-dwellers, but against AHA guidelines when performed for the purpose of filming. There is a shot of a fish writhing on the end of a spear, and it is unconfirmed whether or not this was achieved with special effects or done with an actual fish. Richard also has a shark encounter - he wrestles with the animal underwater and through a haze of blood we see that Richard has stabbed the shark. Although how this action was achieved is unconfirmed, there is a close-up of the shark and it appears to be fake.

Monkeys also make an appearance on the island. Their job is to alert a group rifle-wielding guards of intruders. The first monkey we see is sitting up in a tree with a rope around its neck, which is tied to an armed guard lying on the ground below. When the monkey sees Richard and his friends, he starts to squawk and jump on his perch, waking his human accomplice. Later, one guard-monkey searches a marijuana field for the hidden intruders. Upon discovering Richard, the monkey hisses at him, prompting Richard to squirt the animal in the face with a bottle of water. The monkey scampers off, defeated but unharmed.

The animal sequences in The Beach reinforce the thematic rawness and unpredictability of nature. However, the unconfirmed status of how the animal action was achieved in the spearfishing scene necessitates a Questionable rating from the AHA.