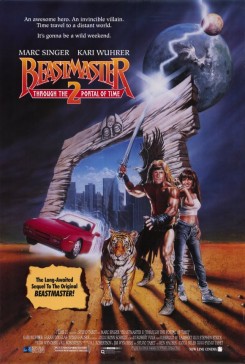 Beastmaster II: Through The Portal of Time

The Beastmaster of the title is the heroic and handsome Dar who communicates with all animals. His constant companions and helpers are a tiger, an eagle and two ferrets. Set in a mythic kingdom, Dar has been captured and condemned to death and eternal damnation by his arch enemy, the evil lord of the land, Arklon. Just as Dar is about to be executed, his tiger attacks the executioner, his ferrets bite a guard's ankles, and his eagle attacks Arklon. Dar springs into action and escapes on horseback, joined by his animal protectors with his would-be executioners in hot pursuit.

After their escape, Dar wanders into a swamp where he meets a strange creature who tells Dar the secret about his birth. Dar has a brother who is as evil as Dar is good. The fate of the world rests on Dar who must destroy his brother before his brother can destroy the world.

In the meantime, Arklon has captured Lyranna, a witch with magical powers. In order to save herself, she takes Arklon through the Portal of Time, showing him a modern Los Angeles where a neutron detonator exists. The detonator could destroy the world, and if Arklon could possess it, he could rule the world. Arklon is determined to steal the neutron detonator, and Dar must stop him. Dar and his animal companions also pass through the Portal of Time and with the help of Jackie Trent, a hip, wise-cracking, wealthy, modern adventuress, they race to save the world from Dar's evil brother, Arklon.

There's animal action throughout this adventure-fantasy. Dar's ferrets travel with him in a sack. At times the sack is tossed or involved in rough action. Whenever that happens, scenes were shot in cuts with no ferrets in the sack or by using fake ferrets. Whenever the ferrets bite a person, they are just nibbling at food that has been strategically placed.

In the tiger attack scenes, the tiger is merely playing with his trainer. When flames seem to erupt near the tiger or other animals, the scenes were either shot in cuts with no animal actually in the same shot, or the animals were a safe distance from any flame, with camera angles creating the illusion that they were closer. When a tranquilizer dart hits the tiger, a fake tiger was used and edited with shots of the real one. Where a close-up of the dart in the tiger is seen, it's the fake tiger. Where the tiger is lying tranquilized, the real tiger is merely lying still, which he has been trained to do.

The eagle used throughout the film is an African Tawny eagle, which is not an endangered species. When the eagle first attacks Arklon and goes for his head, a face mask protected a trainer who doubled for the actor. Food was placed on the trainer's face and the eagle was filmed eating the food. When you actually see the actor's face, a stuffed eagle was tied onto the actor to create the illusion of an attack. Later, when Arklon uses a thunderbolt to fell the eagle, the scene was shot in cuts using both a live and stuffed eagle. The same technique was used in a later scene where the eagle comes back to life. The trainer put the eagle's head under its wing. When the actor touched the wing and the eagle lifted his head, it appeared to be coming back to life.

In scenes with horses, all horsefalls and rearings were performed by trained horses. In a battle scene where huge boulders roll and rain down on the men and horses, the boulders were lightweight fakes, and the trained horses did their rears and/or falls without any boulder actually hitting them.

A variety of wild animals appear in a zoo sequence. In another scene where Arklon spits out a tarantula from his mouth, a fake tarantula was used.