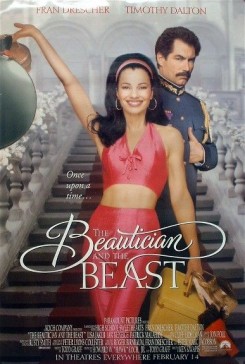 Beautician and the Beast, The

The Beautician And The Beast is a film about Joy Miller, a common New York beautician/beauty culture instructor, who is mistaken for an education teacher and offered a teaching job in Slovetzia for President Boris Pochenko's children. Joy becomes involved in the personal lives of the children and their handsome father. However, she does not agree with his dictators way of handling the matters of state and family. After several failed attempts to change Pochenko's way of thinking, Joy returns to America, heartbroken. In Joy's absence, Pochenko realizes how much he loves her and travels to America to bring her home.

During Joy's beauty class some animals are seen in the background in cages. Hector, one of her students, decides to light a cigarette with a Bunsen burner, not realizing how close the flame is to a wig until it explodes. Joy immediately runs for the animals, putting a snake into her handbag and grabbing cages containing the little creatures. She is next seen walking out of the building holding the cages and animals. The trainers placed the animals, 1 ferret, 4 hamsters, 3 rabbits, 5 rats, 4 frogs, 1 snake, 1 skunk, and 4 guinea pigs, in their cages towards the back of the room away from any smoke or flames. Fans were turned on immediately to keep any smoke from getting to close to the animals. The actor was familiar with the proper handling of the snake and neither human nor animal were in any danger.

Other animal action consists of some sheep and three dogs seen crossing an air strip and in the background two horses are seen pulling a wagon. There are also four horses and riders seen at the end of a procession in the village. Joy's parents have dog and he is seen in a few scenes with a cone around his neck lying on the coach or being carried by an actor. The cone acts as a shield to keep him from scratching the neck area.