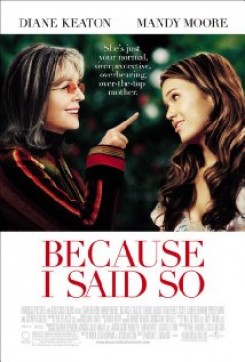 Because I Said So

Daphne (Diane Keaton) plays matchmaker when her daughter Milly (Mandy Moore) continues to fail in the dating department. In a desperate attempt to find a husband for her daughter, Daphne takes out a personal ad on the Internet. Will Daphne's little secret help Milly in her dating dilemma? Or will she cross the line in her efforts to save her daughter from following in her footsteps?

Daphne's dog Cooper is seen doing various things throughout the film like sitting on the couch, watching TV and greeting Daphne at the door. These actions were achieved by a trainer putting the dog on its mark and using a combination of verbal cues, hand signals and toys.

In one scene, Daphne uses the Internet and accidentally stumbles across an adult-oriented website. Cooper looks at the screen and begins barking. Daphne covers the screen with a blanket, and Cooper pulls the blanket off. Then he jumps down and begins to be amorous with a small ottoman. The dog was well-rehearsed for this scene before filming began. A trainer put the dog on its mark by the chair and used a combination of verbal cues and hand signals to get the dog to achieve the action. The ottoman used was very soft.

As Milly leaves with her date, Daphne decides to follow her with Cooper in the car. As Daphne swerves, we see Cooper slide from side to side in the back seat. When Daphne is almost spotted by the couple, she ducks down and only Cooper is seen sitting in the back seat as the car continues down the road. For this sequence, a special bench with a harness was made. An off-screen trainer operated the bench by remote control to make it appear as if the dog was sliding on the seat as the car swerved. Another trainer hid on the floor of the back seat to ensure the dog's comfort and safety. The car was stationary on a moving trailer.

The dog was accompanied by trainers to the set daily, and the cast and crew were instructed on the handling of the animal before filming began.

The two fish that Milly is seen feeding were purchased from a local pet store. One of the crew members took care of the fish during filming, and then adopted them once filming was completed.

During the opening credits, there are several shots of mothers and daughters together. In one shot, a young woman holds up two kittens by the scruffs of their necks. This whole sequence was stock footage purchased by the production.