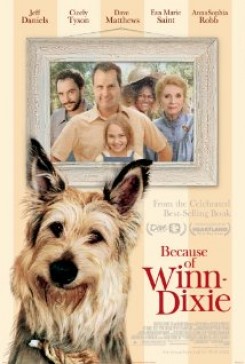 Shortly after settling in the small town of Naomi, Florida, young Opal Buloni (Robb) adopts an orphaned dog and names him Winn-Dixie after the supermarket where she found him. The friendship that grows between the lonely girl and her canine companion brings together the townspeople and helps Opal heal her own troubled relationship with "Preacher" (Daniels), her melancholic, introverted father.

Five Picardy shepherds, a rare breed originating in France, were hired to portray Winn-Dixie. In both the opening supermarket scene and in Opal and Preacher's trailer, Winn-Dixie runs around knocking over all sorts of things. To accomplish this action amid the grocery displays, trainers built special padded ramps to provide secure footing for the dog. Items that fell over were rigged by the props department to tumble after the dog had passed. Winn-Dixie was then put on a mark and cued to run to another awaiting trainer. These shots were filmed individually and edited together in post production.

When Winn-Dixie chases a rat in church, the pursuit is really a compilation of several shots edited together. The trainer used a clicker to cue the rat to run in various directions throughout the room. This same technique was used to film the dog, but instead of a clicker, trainers used a favored toy.

In one shot, Winn-Dixie grabs a mechanical rat – not the real one – with his mouth. However, for the close-up of the rodent dropping to the floor, a trainer held a real animal about eight inches in the air and gently let it go. Actor Jeff Daniels learned to hold the rat by the tail safely. For the rat's eventual escape, producers built a false wall with a hole and trainers lured the rat through it with a clicker and food reward.

In one scene, Otis (Mathews) plays guitar to all the pet shop animals, which have come out of their pens and cages for the concert. To accomplish this, trainers scattered food on the ground and placed the animals on their marks, supervising the action from off camera. When Otis stops playing, the animals scurry around as they follow signals given by multiple off-screen trainers. To fuel the feeling of bedlam, one trainer released a crate of homing pigeons that flew across the set to a retrieval box.

To get Cookie the cockatoo to fly onto Winn-Dixie's head in one scene, producers used a fake furry dog head and filmed the shot in front of a green screen. Since the pet shop and its many residents are featured prominently throughout the movie, the entire set was regularly checked by American Humane's Certified Animal Safety Representatives.

To prepare for the bear scene, producers held a comprehensive safety meeting for the limited crew that would be present during filming. This scene was also filmed in separate shots. For the first part of this dream-like sequence, trainers put Casey the black bear on mark, and the director filmed the bear as he wandered naturally around the set. In another shot, a trainer put the bear on mark and tossed a book made of Styrofoam at Casey, who barely noticed it.

For this scene, producers replaced the police car's side panel with a piece of lightweight sheet metal, and the goat was trained to "head butt" the car on command. The soft metal crumpled easily to make it look as if the goat was doing some serious damage to the car. An off-screen trainer cued the goose to pull on the actor's pant leg. Then, for the scene in which the goose and officer drive away, a trainer hid in the backseat of the car.

In one scene, Preacher removes a thorn from Winn-Dixie's paw. The trainer dulled a real thorn and then carefully placed it between the pads of the dog's foot and placed the dog's paw in the actor's hand. The actor then used tweezers to remove the thorn.