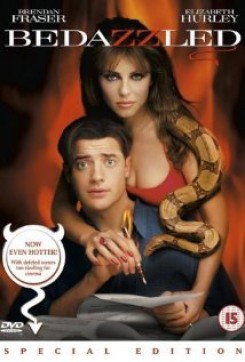 Hopeless dweeb Elliot Richards is granted 7 wishes by the devil to snare Allison, the girl of his dreams, in exchange for his soul.

There is a scene on the beach where the Devil holds two Dobermans and walks up to a couple sunbathing in the sand. The two dogs bark and growl at the couple and then they exit with the Devil. Two trainers placed the dogs on their marks and they happily walked with Hurley about ten feet down the beach. One trainer verbally cued the dogs to bark and growl at the actors lying on the beach, and then retrieved the dogs as they exited the scene on leashes. In another scene, a cat lies on a bed as the Devil points and hisses at it. The cat looks at the Devil, meows, and runs away. A trainer put the cat on its mark and when the actress pointed and hissed at th e cat, it meowed and ran off screen to the trainer, who was waiting with a treat. Later, a man walks a Stallion out of the barn. For this scene, the trainer placed the horse on its mark before the actor took the reins. The actor then led the horse out of the barn and right back to the trainer, who was waiting off-camera. In a brief scene, two guards stand with a leashed German Shepherd at the end of a driveway. To accomplish this, the trainer placed the dog on its mark and the actor held the leash throughout the scene.