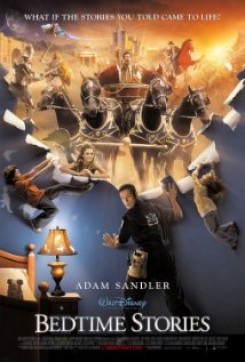 When Skeeter (Adam Sandler) is recruited to babysit his niece and nephew each evening for a week, he tells bedtime stories to entertain the kids. But the innocent tales soon begin to come true.

All cast and crew members were introduced to the animals and were instructed on their proper handling before filming began. Only necessary cast and crew were allowed on set whenever animals were working. All areas were secured and all grounds were checked for debris.

Skeeter's (Adam Sandler) niece and nephew have a pet guinea pig named Bugsy. Bugsy's unusually large eyes were a special effect added in post-production. For the scenes in which Bugsy is shown in a cage, the secured cage was inspected for debris and sharp objects. The animal was replaced with a stuffed prop whenever possible. The braids in Bugsy's fur were computer-generated. To get the pig to shake its head or look in a certain direction, a trainer stood off-camera and held up some food.

For the scene in which Skeeter discovers the guinea pig on his head, a trainer placed the well-rehearsed guinea pig on the actor's head right before filming and instructed the actor to stay very still for this brief moment. Furniture pads were placed on the floor as a precaution. Trainers stood nearby as the actor carefully removed the animal from his head and placed it back in its cage.

For the scene in which Bugsy rings a bell and crawls into his bed, trainers cued the guinea pig with a buzzer to get it to perform the action. For the scene in which Bugsy eats a burger, the guinea pig was fitted with a custom-made "fat suit" that was secured with Velcro. The burger and fries were real, but the pig showed no interest in eating them, and was only interested in eating pellets, which were placed around the burger to entice it to nibble.

For the treadmill scene, a trainer cued the guinea pig to "move forward" on the specially made working treadmill, which moved very slowly. The pig was kept a safe distance from the silverware railing, and a ramp was attached to the back of the treadmill so if the pig slowed down, it would not fall off.

The scene in which Bugsy dances in the castle was filmed in front of a green screen. The guinea pig was placed in a leather sling with monofilament lines and Popsicle sticks attached to it so that the trainer could maneuver the sling like a puppet. The pig was lifted about two inches off the ground. The sling and its parts were then digitally removed in post-production.

The scene with Bugsy in the chariot race was filmed with Bugsy alone in front of a green screen. The trainer set the guinea pig on its mark and used food to get it to look or walk in certain directions. This footage was then inserted into the film in post-production. The guinea pig was never near the elephants or horses.

The guinea pig was kept a safe distance from the fire during the scenes involving roasting marshmallows, and the s'mores ingredients on its face were computer-generated imagery.

For any scene in which a horse performs such mild action as being ridden at a slow pace, being tied to a post, grazing or pulling a wagon, the horses were accustomed to this action, and wranglers stood nearby and/or doubled for the actors. When horses are ridden at a gallop or canter, the riders were costumed trainers and the horses were accustomed to the speed. For shots in which a horse rears, costumed or off-camera wranglers cued this trained behavior. Throughout the horse scenes, on- and off-camera wranglers remained nearby, both on foot and on horseback. Miniature horses were used for a couple of scenes. These horses were well-rehearsed, and the actors were experienced with horses and/or instructed on their proper handling. For scenes that feature a red horse, a nontoxic, nonirritating dye was applied to the horse's hair and removed immediately afterward. The signs seen on horses' torsos were attached using a mild adhesive that was easily removed.

The horse and elephant action in the coliseum was filmed in front of a green screen. A costumed wrangler, who was also an experienced stunt rider, rehearsed the horse action slowly several times before performing at a faster speed during filming. The wrangler stood in for the actor in most of the chariot scenes, except for times in which the actor was shown close up. In close-up shots of the actor, the wrangler hid in the chariot to drive it while the actor pantomimed driving. The whipping of the horses was also pantomimed, and the normal rein-pulling action was exaggerated to make it appear as if the horses were whipped into going faster. In one portion of the scene, Skeeter unhitches the horses and they split off in pairs to avoid running into a ramp. This portion was filmed in separate shots. First, an experienced wrangler drove one chariot using four horses that were accustomed to the action. The shot of the four-horse team establishes the chariot approaching the ramp. Then, two chariots with two horses attached to each were used for the part after Skeeter unhitches the horses. Both of these chariots were digitally removed in post-production. When the actor unhitched the chariot from the horses, no horses were actually there.

Although about a dozen elephants are seen on the screen, only four elephants were actually used in the film. They were filmed separately and the shots were combined and duplicated in post-production to make it look like there were more elephants. Trainers guided the well-trained elephants into position between two ramps and cued them to stay using soft voice commands and elephant guide tools. The overhead shot of the chariot jumping over the elephants was filmed using a special movie crane, which was kept a safe distance from the animals. A special cable rig pulled the chariot over the elephants and onto the other side of the ramp.

For the shot of columns and a roof collapsing behind the cantering horses and chariot, the action was filmed in front of a green screen, and the special columns and roof were rigged to fall at a certain time. The horses ran a short distance and crew members triggered the perforated prop columns to fall immediately after the horse and chariot had cleared the area. The roof rigged with cable, along with the "rocks" on top of it, fell well after the horses were safely away. This shot was well-choreographed and precisely timed.

For the scene in which Skeeter rides the red horse and encounters the posse, stunt riders stood in for the actors. When the men shoot at Skeeter, the guns were props and the actors pantomimed the action. The sound of gunfire was added in post-production.

For the shot in which the horse passes gas, its tail was lifted using lightweight monofilament and the visible "gas" was added in post-production.

Skeeter and Jill (Keri Russell) ride on horseback through a stampede of horses going the opposite direction. This scene was filmed in separate shots. A group of several dozen herd horses who lived together in a corral were cued to run from their starting mark to their home corral. Wranglers on horseback ran in front of the horses to get them to follow them to the corral, where grain rewards were waiting. Panels were used to create three separate aisles. The herd horses were cued to run in the outer aisles, and the center aisle was reserved for the stunt riders, who played the roles of Skeeter and Jill. The stunt riders rode at a lope through the center aisle as the other horses ran in the opposite direction in the outer aisles. Part of this scene was filmed with only the stunt riders and red horse. As an added safety precaution, a panel fence separated the camera car from the horses.

During a birthday party, a man leads a donkey with a child on its back around a yard. The trainer placed the girl on the donkey and doubled as the actor leading the donkey. The yard was fenced in and checked for debris.

A man stands near a goat and places his head near the goat's. Trainers placed the goat on its mark and instructed the actor on how to perform the brief and mild action.

A bulldog lies on the floor near Violet's (Teresa Palmer) feet during a presentation. Trainers placed the dog on its mark and cued it to stay using verbal commands and hand signals. The room was closed off in case the dog decided to wander, which it never did.

The aquarium seen in the hotel room was monitored and maintained by crew members. The fish flying out of the drowning man's mouth on the beach was a prop.

The alligator in Skeeter's moat vision was coincidentally caught on film while cameras rolled at an alligator park. The animal was filmed in its regular habitat.