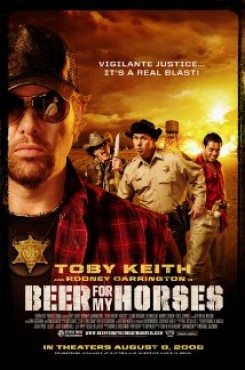 Beer For My Horses

When "Rack" (Toby Keith), a tough-guy sheriff's deputy, discovers his lover has been kidnapped by Mexican drug lords, he takes his inept coworker on a road trip across the border to track down the bad guys and rescue his damsel in distress.

Lonnie (Rodney Carrington) has a pet bulldog named Junior. When Lonnie and Rack (Toby Keith) and their posse go on a road trip to Mexico, Junior goes along. Cast and crew members were introduced to the dog before filming and instructed on its proper handling. Sets were secured, and off-camera trainers stood a few feet away. In a couple of scenes, Junior performs such mild action as sitting or lying on the floor or ground. Trainers used verbal cues and hand signals to cue such action. In a few scenes, Junior is seen riding in the truck, either on an actor's lap or sandwiched between two actors, who petted him and gave him much-loved attention. Whenever the truck was moving, the well-rehearsed actor drove slowly and cautiously. Whenever the truck was stationary or just pulling out from a stop, trainers stood nearby and cued the dog to sit and stay. For overhead shots of the truck moving quickly or a long distance down the highway, the dog was not in the vehicle. For the scene in which Junior is in the driver's seat of the stopped truck in the Mexican village, trainers lifted the dog into the seat and cued him to sit and stay. They used verbal commands and treats to get him to look in certain directions and to stay. The dog was lifted out of the truck between takes or during breaks and was on a leash whenever not being filmed.

Lonnie and Rack happen upon a village of circus folks temporarily living in a field, one of whom has a pet monkey. In a couple of very brief scenes, the monkey is seen sitting or lying next to its owner on the cushions of a couch, which is outside. For this mild action, the trainer placed the leashed monkey on its mark (on the couch-back or on the pillows or cushions) and then hid behind the couch holding the leash and cuing it to stay. Actors and crew members were kept at a distance from the monkey and everyone was well-rehearsed for the brief scenes.

Due to late notification or limited resources, American Humane did not monitor some of the dog action or any of the donkey action.

The film does not carry the disclaimer because the production did not submit a pre-release screening to American Humane, which is one of the requirements to receive the disclaimer.