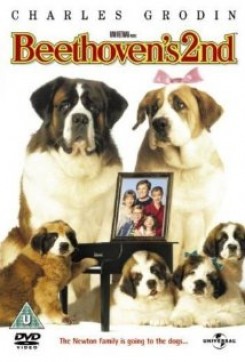 In this sequel to the hugely successful original, Beethoven falls in love with a beautiful St. Bernard named Missy. Missy's owners Regina and Grillo are divorcing and Regina is using custody of Missy to get more money from her husband who loves Missy very much. When Missy gives birth to four of Beethoven's pups, Regina, a vain women who hates animals, is all for drowning the pups until she finds out how much money they might be worth. In the meantime, young Ted and Emily Newton have overheard Regina's terrible plans for the pups and decide to bring them home where they can care for them and where they will be safe. Knowing what their father George Newton's reaction might be to this unexpected addition to their family, the kids hide the pups in the basement where the three Newton children take turns with round the clock feedings. Eventually George discovers the pups and reluctantly agrees to keep them.

When the Newton family take a vacation at a lakeside cabin in the mountains, they bring Beethoven and his pups with them. Little do they know that Regina and Missy are staying at another cabin on the lake. Regina recognizes Ted and Emily at a country fair and demand that the puppies be returned to her, since she is the legal owner. With the villianess in custody of the pups, Beethoven and the Newton family pull out all stops to bring the pups and Missy back to the safe haven of a loving home.

Because the filming of Beethoven's 2nd took place over a period of several months and the puppies had to be a specific age for different scenes, many puppies were used during the months of filming. They were acquired from breeders and were returned to the breeders after filming. The part of Missy was divided between three St. Bernards, and Beethoven was played by two dogs. In addition to the real dogs, a full mechanical dog was used, and at times a man in a St. Bernard suit was also used. An articulated head that was capable of portraying several facial expressions was sometimes used for close ups.

The film begins with a typical morning in the Newton household. After the family leaves for the day, the bored Beethoven sneaks out of the house. As he wanders about, he gazes wistfully at a pair of poodles being walked on lease, a pair of doves in a tree and a pair of dogs kissing in the park. When his eyes fall upon the beautiful Missy, it is love at first sight and the two dogs nuzzle as Grillo gives them each an ice cream cone. For this scene, the dogs responded to their trainer's command, "Nuzzle", which Beethoven did easily. The dog playing Missy was a bit reticent and required some food placed in Beethoven's collar as an extra incentive for her to nuzzle. When Regina comes to the park and takes Missy away in her car, Beethoven chases the car through the streets. For this scene, no public vehicles were permitted in the area and all moving traffic was controlled for the safety of the dog.

Beethoven follows Missy to the apartment building where she lives. He goes around to a side of the building where there are balconies, and soon Missy appears on a ground floor balcony. Beethoven jumps onto the balcony and the pair kiss. Then Beethoven beckons Missy to follow him and the two dogs jump back over the balcony. To achieve this scene, a ramp was built on the outside of the balcony from which Beethoven could jump onto the balcony. The balcony was built up from the inside so that the two dogs jumped from the raised floor onto the ramp as they left the balcony. The dogs responded to their trainer's vocal commands to do these jumps and they were given food as a reward. Beethoven takes Missy to a drive-in movie which they enjoy while munching on some popcorn. For this scene they did some additional nuzzling which was handled in the same manner as before. On another date, Beethoven and Missy ride in a carriage which is driven by a man on a bicycle. The dogs eat hot-dogs and stroll.

After the passage of several months, Missy gives birth to four puppies. There's no birthing scene, just four very young puppies with Missy and Beethoven in the basement storage room of Regina's apartment. The pups in this scene were not newborns but four weeks old. Although the pup's mother was nearby at all times, they'd been weaned and were no longer nursing. The pups were fed goat's milk at proper intervals. When Ted and Emily rescue the pups by carrying them out in a box ,the young actors were actually carrying an empty box, with no puppies inside.

There are a series of shots of the puppies doing a variety of things at the Newton home. One pup gets onto a skateboard which is in the driveway and glides down the driveway on the skateboard which stops abruptly when it hits the side of a dump truck. The puppy is propelled over the truck and flying through the air, lands safely in a container of grass clippings. To train for this stunt, many puppies were tried and the one with the best balance was selected. Food was put on the board to get the puppy to climb onto it He first learned to stand on it and then to stay as the skateboard was slowly moved. The puppy was trained with voice commands, with baby food as a reward. The scene was filmed in cuts with a real and fake puppy. The real puppy stood on the board as it coasted down the driveway. The skateboard was controlled by use of a monofilament which pulled the skateboard at a slow speed. When the skateboard hits the side of the truck, it's a mechanical puppy on the skateboard and when the dog flies into the air it is a fake dog that is flying.

Ted goes into a village store and leaves Beethoven out on the sidewalk with his leash tied to a newspaper vending machine. When he sees Missy ride by in a car he starts pulling at the chain, he strains and pulls over several vending machines. This scene was shot in cuts. The vending machines were rigged so that they were not heavy for the dog to pull. Separate shots were filmed of the dog just pulling on his leash. A special effects man pulled the vending machines.

Ryce is taking Beethoven for a walk along the beach when she hears some loud music coming from a teen party at a large cottage. The cottage has a wooden deck that is one story above the beach and that stretches right over the water. When Ryce is invited to the party, she ties Beethoven's chain to a post which supports the second floor deck. Ryce is inside the cottage when raucous teenagers on the deck start dropping beer on Beethoven who is below them. This scene was shot in cuts. When the teens were pouring the beer,( actually colored water) the dog was not there. For the shots of Beethoven being doused with beer, he was wet down with plain water. Beethoven becomes agitated with all the tormenting and he leaps forward, yanking out the post which supports the deck. The deck collapses into the lake, carrying the teens down with it. This scene was filmed in cuts and all the details were worked out in advance so that nothing would fall on the dog. Beethoven's chain was rigged to break easily and a special effects man was the one who pulled a cable to collapse the balcony. Seven cameras filmed this scene at the same time in order to decrease the number of necessary takes needed to achieve this scene.

The Newton family attends a country fair where there are pony rides for the children and games and contests for the adults. George and Beethoven enter a contest where they are pitted against other dogs and their owners to see who can eat the most hamburgers in three minutes. Of course, George and Beethoven win. Special lamb burgers were made for the dogs to eat and the scene was filmed in cuts. Baby food was placed in the bowls that the dogs licked out.

After Regina regains possession of the pups, she releases them into the woods with the hope that they will lead her to Missy. The pups sniff the ground, climb over logs and branches, and cross a small foot bridge. These scenes were filmed in many cuts and were basically A to B action where the pups responded to a buzzer with food as a reward. When they crossed the bridge, extra safety precautions were taken, such as safety nets on either edge of the bridge and handlers ready to catch any pup that might stray off the side of the bridge. (None of the pups did.) While in the woods, the Newton's confront Regina and Floyd, her partner in crime. Floyd takes a puppy and holds it over the side of a very steep cliff, threatening to drop the pup. This scene, again, was shot in cuts with a real pup and a fake pup. Of course, it was the fake one that Floyd held in his hand over the edge of the cliff.

At the end of the film, in a dream sequence, the Newton's living room is filled with nearly 30 puppies. The area where the pups were filmed was caged in so that no pup could accidentally stray. They were placed in position by a dozen handlers and were filmed as they moved about.