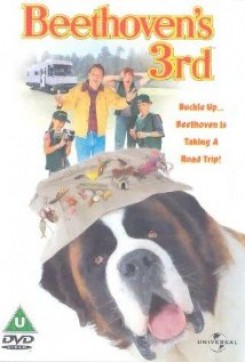 Beethoven's Third is an all new adventure filled comedy. We meet the Newton family, who is preparing for a cross country drive to attend a family reunion. The Newtons have agreed to take a big, lovable St. Bernard with them and deliver him to Richard Newton's brother. When two bumbling thieves threaten the family, they are glad to have Beethoven with them.

The part of Beethoven was shared by three St. Bernards: Stanley, Zach, and Wrangler. There were three trainers and veterinarians on the set at all times. When the dogs were on the set, fake grass was put down for them to lie on and big umbrellas were used to shade them. The film was shot in Big Bear, California.

In the scene where Beethoven is riding in the boat being towed by the camper, a seat was removed and pads were put down so our star could ride in comfort. The dog wore a safety harness that was secured to the boat, so he wouldn't move around. The trainer was hiding in the boat with Beethoven.

In the scene at the beach where there are some dogs that look like Beethoven, all three dogs were used. It was filmed on a private beach in Malibu, California. The trainers placed the dogs on their marks and stood off camera using hand signals to help the dogs achieve their action.

A stuntman was dressed in a giant hot-dog costume for the scene where Beethoven chases the hot-dog man in a field. The trainers released Beethoven and verbally cued him to follow the stuntman, which Beethoven playfully obeyed.

After dad falls into a lake, we watch as Beethoven jumps off the dock and rescues him, bringing dad safely back to shore. One trainer verbally cued the dog to follow her as she ran down the dock and jumped into the water. The dog happily obliged. The actor who played the dad was already in the water and called to the dog, and again Beethoven responded happily. The actor grabbed hold of the dog's leash and swam back with the dog to shore.

In one scene, Beethoven is taken to the kennel and is able to break free of his leash. Then the dog runs after a car. One trainer released the dog and the other trainer standing across the way called to Beethoven, who obeyed. The car was filmed separately and the scenes were edited together in post production.

In another scene where Beethoven sits in the bleachers with his family, we see several close-ups of Beethoven's face as he reacts to what he is watching. One trainer placed Beethoven on the bleachers with the actors, as the two other trainers stood just off camera and used different squeaky toys and verbal commands to make the dog react.

In the scene where Beethoven is licking the giant ball of earwax, a big plastic ball covered with Kayro Syrup and baby food was used. As you can imagine, it wasn't hard to get the dog to lick on command!

Real diluted tomato juice was used in the bathing scene after Beethoven was sprayed by a skunk. After the scene was over, the trainer gave Beethoven a bath with soap and water. And to make the dog shake, the trainer poured a small amount of water on the dog's head right before filming began. It never failed to work!

A few weeks before filming began, the trainers began feeding the dogs hard boiled eggs so they would acquire a taste for them. As you can see in the scene where Beethoven eats several heard boiled eggs, it worked!