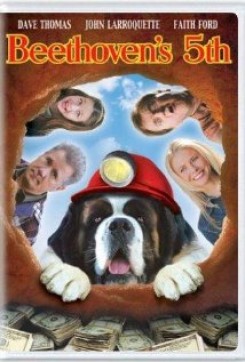 Beethoven's 5th finds your favorite St. Bernard on a hunt for hidden treasure when he accompanies best friend Sara (Daveigh Chase) on a summer visit to her uncle Freddy (Dave Thomas), who lives in the usually quiet town of Quicksilver. Leave it to Beethoven to stir up trouble with a local Pomeranian named Babycakes while helping his friends discover the sleepy town's secret history.

When not hunting for buried treasure, Beethoven spends most of his free time sneaking food from unsuspecting victims. Whether savoring licks of ice cream off the kitchen floor or sneaking treats from the desk of the local Sheriff (played by Faith Ford), Beethoven's got a one track mind when it comes to snacks. In fact, he's such a culinary connoisseur that he grocery shops with Freddy, picking out his favorite items like a pro and even pulling the cart with his leash. But Beethoven always seems to know when to put his sweet tooth aside and be a hero, and this adventure is no exception.

From the very first scene to the last, Beethoven finds time to steal food from nearly everyone he meets, much to the delight of the canine stars bringing the hungry character to life. Needless to say, the dogs did not need much encouragement to take the tasty treats, all of which were provided by the dogs' trainers and deemed safe for the animals to consume.

Always willing to lend a helping paw—especially when food is involved—Beethoven helps out at the grocery store by pulling the cart with his leash. He puts his paw up on the groceries and knocks them inside of the cart. Excited to see the town Sheriff, who also happens to be shopping at the store, Beethoven runs towards her, accidentally taking down an entire shelf of groceries in the process. Trainers cued the dog to achieve his action from off camera using a squeaky toy, while production helped ensure that the grocery store and items in it were St. Bernard-safe. The cart was light and easy for the strong animal to pull on its harness, and off-camera trainers guided the animal's direction.

As the star of the film, Beethoven is featured in nearly every scene, and when he's not busy eating, he accompanies Sara and Freddy on their daily adventures. Whether Beethoven is riding on a fire engine truck or rolling along on a mechanics creeper, trainers practiced every action with the animals before filming, and verbally cued the dog from off-camera for every scene. Safety was the main concern for the animals, and every effort was made by production and trainers to ensure that the all of the dogs were well-cared for. Needless to say, the sizable St. Bernards were handsomely rewarded for their efforts on the film, and treats were always on hand for a job well done.

On one particular adventure, Beethoven discovers hidden treasure – after a trip to the woods, the dog brings back paper money in his mouth and gives it to Sara. Trainers cued the dog to pick up the fake money and walk over to the girl, who then took the money from his mouth.

A little white Pomeranian named Babycakes hangs out with her owner, Eva (Kathy Griffin), at the local pharmacy. Babycakes takes notice of Beethoven, who is waiting outside, and hops down from the counter to bark at Beethoven from her window perch. Babycakes further aggravates Beethoven by spinning around and wiggling her backside at him from inside. Trainers cued Sashie the Pomeranian from off camera to jump down off of the counter and speak and was delighted for the opportunity to show off her well-practiced tricks for everyone on set.

Back for more attention, Babycakes pops out of Eva's bag and barks. She jumps down and runs off, dragging the bag on her leash behind her. She runs down the courtyard steps and into the empty street. The trainer placed Sashie inside of the carrier and she popped up and barked on cue. For Babycakes's escape, a trainer placed a carpeted platform for the dog to jump down onto and called to her from off camera.

Babycakes the dog chases after the bus, complete with her bag dragging on her leash behind her. A trainer called Sashie to run into the empty, blocked-off street. The carrier was lightweight and Sashie had no trouble dragging it behind her as she ran.

Uncle Freddy takes Sara and her friend, Garrett, fishing. While Beethoven amuses himself by sticking his head in a bucket, the family manages to catch a fish. Garrett holds up the fish, which is still hanging on the end of the line. Both live and dead fish were used for this scene, which was accomplished per AH Guidelines. No live fish were harmed for the scene. A treat was placed inside of the large bucket to prompt the dog to poke his head inside.

Later, Beethoven creates a disaster in the library, knocking over several shelves of books. Amidst the commotion, an alarm bell lands in the fish tank. Unmoved, the fish swim around it. Trainers called the dog using his favorite squeaky toy and he happily barreled into the shelves, effectively knocking them over. Trainers choreographed the action to ensure that the dog was never in the way of any falling matter. The alarm bell was actually placed inside of the aquarium, and the fish were not affected by its presence.

Taxidermy cats are scattered around a house. Production purchased several taxidermy cats from a professional taxidermist and placed them around the set.