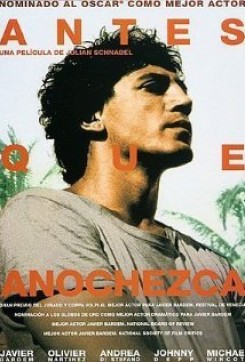 "Before Night Falls" is the biographical drama about the life of Cuban poet Reinaldo Arena (1943-1990). Although Arena joined Castro`s rebels as a young man, he was later persecuted and imprisoned for his work and for his open homosexuality. He eventually escaped Cuba during the Mariel boat-lift, but died of AIDS in New York City while living stateless and in poverty. Filmed on location in Mexico, the story depicts the poet`s life from his rural childhood in the Oriente province of Cuba through his two years of imprisonment before his escape. The film has some mild animal action that includes a burro at the shore of a river, a horse drawn cart and some pigeons that fly amidst the rafters. One other scene utilizes a bird that appears to be in distress. During his incarceration, conditions are so miserable that the prisoners are driven to catch birds to survive. In one scene, there is a bird that appears to be captured by an inmate. The bird appears to be tied as if having been lassoed with a rope tied to the end of a stick. As it flaps, appearing to frantically fight for escape, it is then pulled through a hole in the roof of the cellblock and seen fluttering as it is lowered into the dark cell.

AHA was not notified of the filming of this movie and was not present on set to monitor the animal action. After screening the film, AHA raised questions regarding the captive bird sequence. The director has described this scene as one that dramatizes the survival skills of a legendary Cuban prisoner who would "fish" for birds to eat through the bars of his cell. This prisoner supposedly used a stick attached to a line with a hook on the end to lure and capture the birds. The filmmaker stated that he did not want to actually hook a bird for the purposes of filming and planned to film the sequence without harming the animal. According to production, the trainer/handler of the bird tied a soft cord around the bird and then attached the cord to the stick. Production stated that the handler then shook the stick to make the bird flap its wings and appear to be captured. However, in screening the film the bird appears to be tied around the neck area and flapping its wings frantically, while the stick appears to remain stationary. Then the bird, tail first, still attached to the stick, is pulled through a hole in the roof. The bird continues to flutter as it is seen amidst chains in the darkness of the interior cell. Since the images in the film appear inconsistent with the explanation of how the bird was handled and the bird appears to be distressed, AHA is rating the film Questionable. According to AHA Guidelines for the Safety of Animals in Filmed Media, "no animal shall be allowed to become overheated or suffer discomfort." Also, under the heading of Costumes, Rigging, Make-Up and Props, the Guidelines state: "Tie-downs shall not be used on ANIMALS not properly trained to wear them, or if the ANIMAL struggles or resists."