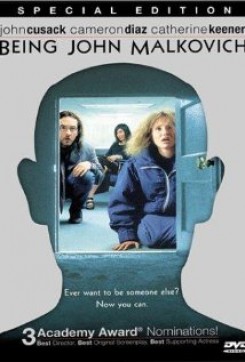 Being John Malkovich is a film about a puppeteer, Craig, whose career is non-existent. He takes a filing job, and discovers a secret portal that transports people into the mind (and body) of John Malkovich. This discovery sets off an interesting chain of events in his life, and in the lives of those close to him, including his wife.

Animals are everywhere - except with John Malkovich

Animals help to define the character of Lotte, Craig's wife. By day she is the owner of a pet shop and by night she is the doting owner of a variety of personal pets. Among her domestic critters are a parrot, a dog, a cat, a snake, a cat, a snake, an iguana and a chimp. She appears to mother the chimp, Elijah, and treats him more as a child than as a pet. However, Elijah appears to be among the few who are not interested in being John Malkovich.

Acting up for the camera:

The chimp was humanely trained to do many behaviors such as waving his arms, patting his stomach and stirring dinner on the stove. This is called method acting.

The chimp responds to verbal and hand commands. His versatility makes him the directors' dream. ... and food rewards. This is part of his contractual agreement.

In several scenes the chimp is seen with the dog or other companion animals in the apartment. However no one receives top billing.

The dog and the chimp were prepped to be together in their scenes. Rehearsal pays off.

Please see our update on the "Chimp Channel" for more information on chimps in film and television.