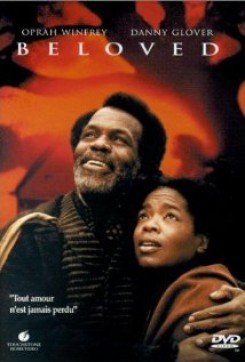 Beloved is a film based on the Pulitzer prize winning novel by Toni Morrison about Sethe, an escaped slave, who is haunted by the spirit of her deceased daughter.

The film opens with Sethe in a house possessed by a supernatural force. A spirit is supposedly swinging Here Boy, the family dog, around in a circle, propelling the dog to hit the wall and the floor. After landing on the floor, the dog's eye is hanging out of its socket. Sethe picks the dog up and gently lays it on a table where she proceeds to put the eye back into place. The dog is lying on the table with its tongue hanging out and whimpering as she tries to care for his wounds. This scene was shot in cuts using both a real and an animatronic dog The animatronic dog was actually swung around the room striking the wall and the floor. It was also used to portray the eye injury and for the filming of Sethe nursing the eye. A quick release mechanism was used and engineers managed all movement by remote control. Later in the film two turtles are observed mating. These were also animatronic doubles.

There are a few other scenes where Here Boy is lying under the house or walking from A to B in the yard. For these scenes the live dog was used. He was cued by trainers and given food rewards.

When Beloved is first seen in the film, she is near a pond and ladybugs are crawling all over her face and arms while butterflies are flying all around her. The trainers placed the ladybugs on her collar, neck, and cheek and on the ground around the actor's feet. The butterflies were simultaneously released from two different areas within camera range. Approximately 5,000 butterflies were released for filming. They consisted of species that were compatible to the location. Over 400,000 ladybugs were used and released gradually over the course of several takes.

Throughout the film horses are seen pulling wagons, trotting from point A to B, tied up at a hitching post etc. Pigs, cows, chickens, and other farm animals are seen in various settings during the film. Scenes at a slaughterhouse were filmed using food props.