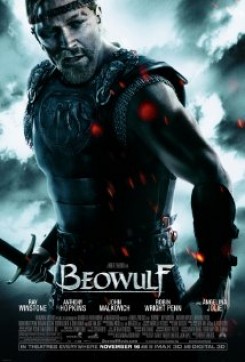 After the monster Grendel attacks and kills several people of a Danish village, the king (Anthony Hopkins) must find someone brave enough to slay the beast and save the village. The warrior and strongman Beowulf (Ray Winstone) comes to the town's rescue, but his battle becomes complicated when pride and lust get in the way.

This film was created using motion capture technology, in which performers wear miniature computerized motion sensors near joints and facial areas to capture the movements, nuances and facial muscle activations that occur with each gesture or motion. The live action is performed in a motion capture studio covered in dark fabric and carpet (called a "void") and then recorded as computer animation data, which is then mapped onto a computerized 3-D model. Humans wear a bodysuit for the "capture," but animals need to be "captured" differently because of their body shapes, fur and other characteristics. To prepare the animals for having their motion data recorded, trainers shaved the areas of fur where the movements would be recorded, such as near joints and on the face. Velcro was attached to the assigned areas using a nontoxic, nonirritating silicone adhesive. White light-reflective balls were placed on the Velcro to capture the motion data onto the computer. The exception to this was for horses' tails, which were not shaved, but wrapped in a sensor-laden material. The adhesive and any additional markings were washed off each evening after filming ended.

Throughout the film, horses are seen outdoors, standing or being ridden at a walk, canter or gallop. These scenes were all filmed inside the capture studio. Horses were given ample room to start and stop their runs. Computer animation and post-production movie magic created the atmosphere, be it snow, water, castles or bridges. Whenever horses appeared to be near fire, trainers cued them to "dance" or act skittish or afraid — the horses were not actually agitated or ever near fire. Well-rehearsed actors, costumed trainers and stunt riders guided the horses to run certain ways and at various speeds. Custom-built ramps were secured to the ground for scenes involving upward or downward movement, such as the horses running up a staircase surrounding a castle. Post-production effects made the movement of horses on an incline appear longer and more intense than it really was. Carpet was secured to all floors and ramps to give the horses safe and comfortable footing. Whenever a horse is seen rearing, a trainer or stunt rider cued the horse to perform this action. All weapons used near horses were plastic prop weapons wrapped in foam.

At one point, a dragon appears to grab a man on horseback and lift him off his horse, causing him to briefly stand on the horse's saddle before being pulled into the air. This scene was filmed in separate shots and edited together later. A stunt rider began by squatting on the saddle while the horse cantered. Then, the rider stood up briefly while the camera captured the image. Afterward, the stunt rider jumped off the horse and onto a stunt pad.

A horse with a rider jumps over a missing section of bridge and lands on the other side. Two apple boxes were placed wide enough apart for the horse to easily walk between. Then a small, custom-made piece of wood was placed on top of the boxes. This wood served as the horse's obstacle to jump over. As a safety precaution, the wood piece was crafted to fall aside easily if the horse did not clear the jump. The way in which the wood piece was set up allowed the horse to run right through the apple box contraption if the jump was unsuccessful. Camera angles made the jump look long — it was actually a short distance, and the horse was accustomed to jumping that distance.

When a man appears to awkwardly mount a horse, the man was a stunt rider who only pretended to mount the horse with difficulty. He actually started his mount by standing on a ramp and had no trouble climbing atop the horse. His gentle approach did not bother the horse, which was well-prepared for the action so that it would not be spooked.

A dog enters the great hall of the king and later bares his teeth in a growl. Two mice run on the rafters, where one is snatched up and carried away by a hawk. In another scene, two horses collide and fall down. The dog, mice, hawk and horses in these scenes were all created by computer-generated imagery (CGI).