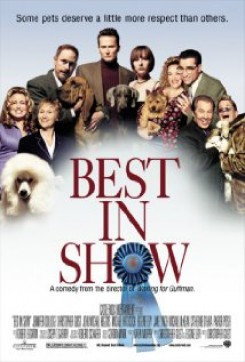 This latest comic mockumentary by Christopher Guest has both bark and bite! It gives us an inside look into the frenetic world of competitive dog shows and their owners.

This movie was filmed mostly in Canada with only three days of filming in Los Angeles. It is based on The Westminster Dog Show in Westminster, New York. The woman who played the judge in the movie is an actual judge. Except for the few starring actors, most of the people were breeders with their personal dogs who felt very comfortable in their surroundings. The dogs that belonged to the characters in th e film were accompanied by trainers. The actors were introduced to the dogs early in the production so they both could become comfortable with each other. The trainers would set the dogs on their marks and then stand off camera using hand signals to help the dogs achieve their action.