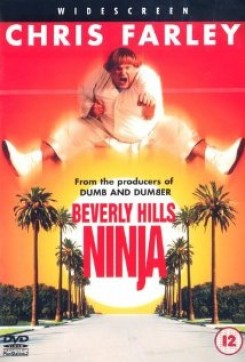 Beverly Hills Ninja is a film about ninja's and the legend of a foreign child that will one day come amongst them and be known as the great white ninja. One day a white baby is found in Japan at the Dojo, a ninja school. The ninja's, believing that he is the great white ninja, raise him as one of their own. Haru, as he is called, is trained to be a ninja, however, he does everything wrong and doesn't graduate. One day a woman named Alison comes to the Dojo, looking for a ninja to help her investigate her boyfriends illegal activities. Haru thinks the woman is in trouble and he goes to Beverly Hills to help her.

In one scene Haru is at Alison's boyfriend's house and encounters a guard dog. Haru attempts to blow a couple of blowdarts at the dog but misses. However, he does hit a raven and it is seen dropping to the ground. The dog starts nudging the raven with his nose and then starts to nibble at it. He quickly gets bored with the bird and turns his attention to Haru and starts chasing him through the grounds. This segment was shot in cuts. A fake raven is used. Haru is never seen hitting the bird with the darts. The fake raven is seen being dropped a few feet above the ground. For the shot of the dog nibbling on the bird, the trainer placed dog treats inside the fake bird. Unbeknownst to Haru, Gobei, his brother, is on the roof and lowers a harness to hoist the dog up as he passes. The dog is heard yelping as Gobei hoists him up to the roof. For this portion of the scene, trainer #1 released the dog while trainer #2 cued the dog with a whistle from around the corner. When the dog is trapped and then hoisted into the air, trainer #1 released him while trainer #2 cued the dog to jump through a hoop. As the dog is being hoisted in the air he is wearing a full harness and is slowly lifted by the trainer. As a safety precaution a fall mat was placed under the dog. The dog was lifted only 10 to 15 feet in the air and then slowly returned to the ground. The dog was pre-conditioned to the use of the harness therefore, he was very comfortable with the scene. All sound effects of the dog yelping were inserted during post-production. Later while on the balcony, Haru encounters the dog again when he pulls on the rope and finds the animal hanging over the ledge. The dog and Haru look at each other and the dog begins to growl. Haru lets go of the rope and the dog supposedly falls to the ground. In this segment of the scene trainer #1 was on a scaffold at the balcony level. The scaffold was covered with a rubber matting. The dog was again in full harness gear and hoisted approximately 3 feet in the air for a brief period and returned to the scaffold. There is a scene where Haru is in a Chinese restaurant and he fights two men with two large gutted fish that he picks up from a serving tray. This fish were purchased from a fish market. Other animal action consists of a scene at a race track where Haru is driving down the track as horses approach and pass. Two horses are seen in front of the car before it turns off of the track. The horses were ridden by professional wranglers.