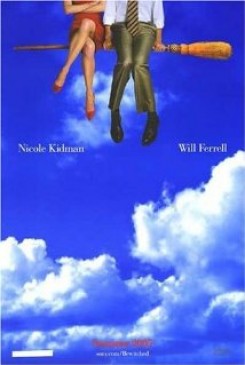 When Hollywood producers decide to remake this classic sitcom from the 1960s, B-list actor Jack Wyatt (Will Ferrell) pushes to cast an unknown woman as Samantha and tweak the show to revolve around Darrin instead. A chance encounter with the lovely Isabel Bigelow (Nicole Kidman) convinces Jack he's found the perfect Sam. But no one knows they've actually cast a real witch in the co-starring role.

In the opening sequence, Isabel arrives at an "open house" with her black cat Lucinda. The cat later trots to the front porch, looks over at Isabel, and goes inside through the magically appearing kitty door. The trainer dropped Lucinda in front of the camera from approximately two feet above the ground and retrieved her as soon as the camera panned past the cat. Wranglers prepped the cat using a removable mark on the porch during rehearsals, and when the cameras rolled, they cued Lucinda to go to her mark and give looks, which earned her a food reward when the cameras stopped. For safety, additional handlers were in position on either side of the fenced yard and the street was closed to traffic.

As Isabel struggles to set up her home entertainment system, Lucinda bats at fluffy things floating in the air. For this action, trainers positioned the cat on a VCR box and verbally cued Lucinda to stand on her hind legs and swat while nearby fans blew Styrofoam "peanuts" in the air. According to the trainer, the cat was well-prepped for this action and reacted very comfortably to the fan.

Near the end of the film, Isabel sits on the Bewitched soundstage with the cat on her lap until Jack arrives to woo her back. From the sidelines, the magical cat meows and wrinkles her nose when Jack mentions getting married. Trainers rehearsed this scene with the cat using a few different end marks. For the take that made it to the big screen, a trainer placed the cat on Kidman's lap and repeatedly cued her to stay. After the actress gently set down the cat, the animal moved to the end mark on the side of the porch and waited in a sit-stay until receiving a food reward. The shot of Lucinda making magic was a video effect. According to American Humane's Certified Animal Safety Representative monitoring the set, Kidman appeared very helpful and concerned for the cat's needs.

During rehearsals of a classic Bewitched episode, a dog named Satchel must choose between an ex-girlfriend and Darrin when both call for him. Isabel has other ideas, however, and she uses magic to lure the dog to her. For two takes, Satchel hops onto the dining table and jumps right into Isabel's arms—despite the best efforts of a trainer standing off camera with a chain of sausage links and steak!

The first part of this sequence, when Satchel's loyalty is tested, was actually filmed without the actors in the shot. To get Satchel to look back and forth, two trainers stood out of frame in opposite areas calling to the dog. For the subsequent action, a trainer placed the dog in a sit-stay position and cued him to jump on the chair and then onto the dining table. Handlers then directed Satchel to leap into the actress's arms.

While Isabel and Jack rehearse a scene at the piano, a dog sits in a wing chair on the set. The trainer positioned this spaniel mix named Riley on a sit-stay and stood off camera using a feed stick to direct the dog's upward look.

The fish tank appearing in Jack's bedroom in one scene was supplied and maintained by Fish Art Aquariums of Beverly Hills, California.

Although the scenes do not appear in the theatrical release, American Humane's Certified Animal Safety Representatives also monitored action with an elephant, during which production adhered to all Guidelines established by American Humane. This animal action may resurface on the DVD release.