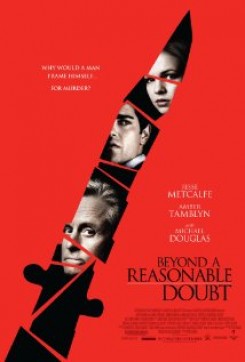 Beyond A Reasonable Doubt

An investigative journalist (Jesse Metcalfe) plans a scheme to catch a corrupt district attorney (Michael Douglas), which ends up backfiring on him.

C.J. (Jesse Metcalfe) and his pal Corey (Joel Moore) go to an animal shelter to adopt a Jack Russell terrier. An employee walks them down a long row of kennels to a kennel with a Jack Russell, which is jumping up and down as they approach. The employee opens the kennel door and picks up and holds the dog. C.J. asks to see the dog's teeth and the employee pulls up the dog's gums to show him the teeth. Later, Ella (Amber Tamblyn) goes to the same kennel and walks with the employee down the rows of kennels again. The kennel in these scenes was a real animal shelter and most of the animals in the cages were "residents." The Jack Russell was placed in its own kennel after the kennel was disinfected. The trainer cued the dog to jump up and down as the actors approached. The trainer instructed the actors on the handling of the dog before filming began. The production spent two days filming at this shelter and several of the cast and crew fell in love with animals that were up for adoption and adopted them. All of the shelter dogs were checked out beforehand to make sure they were all healthy and current on all their vaccinations.

Dogs in a park run an agility course as C.J. is filming a news story. All of the dogs in the park were professional agility dogs and were accustomed to the equipment and to running the course. Paw Prints Agility Club in Louisiana provided the equipment, animals and handlers for this brief scene. All grounds were checked ahead of time for hazards and the cast and crew allowed on set were limited. Dogs were leashed at all times except when running the course.

For a shot in which a man holds a small dog at a crime scene, the actor was instructed on the handling of the dog before filming began. A trainer handed the actor the dog just before cameras rolled and stood just off-camera to retrieve the dog afterward.

C.J. carries his new dog, Woodward, inside his apartment and sets it down. He shakes a pair of sweat pants in front of the dog to get the dog to grab them. The dog grabs a hold of the pants and begins to shake them in his mouth. In another scene, as C.J. walks Woodward down the sidewalk, Ella approaches, picks the dog up and kisses him, and he licks back. Later, in the kitchen, the dog is on the floor eating food from a bowl. All of this action was achieved in the same manner. A trainer placed the dog on its mark or handed the dog to the actor right before filming began and then stood just off-camera to supervise and retrieve the dog afterward. For the sidewalk scene, as the actress approached the actor and the leashed dog, she used a clicker to cue the dog to run to her. She had just eaten a piece of cheese, which the dog could smell on her, which motivated the dog to give her kisses. The set for this scene was closed off to traffic, the grounds were checked for safety and cast and crew allowed on set were. The dog bowl in the kitchen scene was filled with dog food smeared with peanut butter, and the sweat pants were smeared with peanut butter and had the dog's favorite toy hidden in them to entice him to go after them.

Ella sits in bed and talks to Woodward as he plays with a toy on the bed. A trainer placed the dog on his mark and gave him a toy to play with. The trainer stood nearby to retrieve the dog afterward.