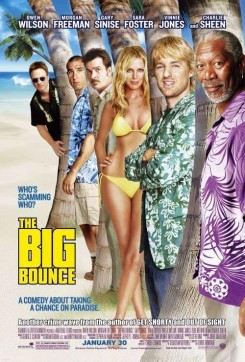 Based on the novel by legendary crime writer Elmore Leonard, "The Big Bounce" follows likeable drifter Jack Ryan (Owen Wilson) to Hawaii, where he soon discovers that the temptation for a new con or a little romance is everywhere. Jack lands a construction job working for shady real estate developer Ray Ritchie (Gary Sinise), but his real troubles begin when he gets involved with Nancy Hayes (Sara Foster), a blonde bombshell who just happens to be Ray's mistress.

In one scene, Jack drives up and parks near a house, then walks by some chickens scattered on the front lawn. A few goats also appear deep in the background. As Jack goes inside to play cards, he passes a dog lying close to the house. When Jack exits, a pig stands outside the door, snuffling around. A trainer tied the three goats to trees in the rear of the yard, which provided them with plenty of shade as they grazed on grass while the camera rolled. The chickens were placed in the yard near trees and had lightweight monofilament lines attached to their legs so that they wouldn't wander too far away. Trainers scattered food on the lawn to keep the chickens occupied. The actor drove the car slowly and made sure he knew exactly where the animals were at all times. One trainer positioned the pig on its mark and sprinkled some food on the ground to hold its attention during the shot. Another trainer put the dog on its mark and stood just off camera using hand signals to get the dog to stay.

The production provided receipts from a taxidermist for the animal heads that hang on the cabin's wall.