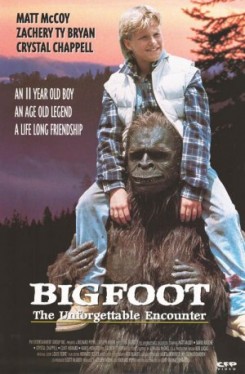 Big Foot is a present day adventure that takes place in the Modoc National Forest in Shaver Lake, California. There has been a sighting of the mysterious, legendary "Big Foot." Our story begins with four drunken hunters shooting their rifles at what they think is a giant Grizzly Bear. At their cabin later on the same night, as they drink bottles of whisky, the story grows. The hunters think they really shot and wounded Big Foot. After they have all passed out, a large dark predator whom we never really see, makes his move, beating them senseless. It is only later that we are told that the predator was a large grizzly bear. One of the hunters is missing and presumed dead. Later that morning, we see a wildlife artist painting in the forest. He sights Big Foot and takes several photographs of him, then turns the photos over to the Forest Rangers. As the announcement of the "Big Foot" sighting comes over the air waves, people come from all over to see the phenomenon. An obsessed billionaire wants Big Foot for a museum piece and offers a $1,000,000 for his capture -- dead. Professor Samantha McClarty, an anthropologist, wants Big Foot alive for scientific study. A little boy, Cody, and a Park Ranger want him left alone in peace.

Animal action is simple. Big Foot is, in reality, a large man dressed in a costume. As the credits begin, we see a big black bear in a stream with a fish in his mouth. This scene was actual stock footage. Other stock footage included some sea gulls free-flying and a scene with three rams standing on a ridge looking over the valley. which also appeared in the beginning credits. In the small town of Shaver Lake, four riders on horseback ride slowly across the road as atmosphere. Further up in the woods, two young boys, Cody and Ben, approximately 12 years old are camping with Cody's parents. The boys wander off to play, having been told not to wander too far. Cody suggests that they play a game. He will go one way and Ben will go in the opposite direction and meet at the top of the ridge in front of them. Ben arrives at the top of the ridge first and stands around waiting for Cody until almost sundown. At this point, Ben believes that this game has just been a trick and wanders back to the campground expecting to see Cody laughing at him. Instead, all campers in the area have been asked to evacuate because of the fear of Big Foot being nearby. In the meantime, we see Cody aimlessly wandering around lost. As he continues his search for the way back to the campground, he comes within a few feet of a large black bear, takes off running, and gets caught in a bear trap. Big Foot, who stands at the top of the ridge sees the bear chasing Cody. He jumps from the ridge and goes after the bear. They fight bitterly with Big Foot sending the terrified bear off running. The scene with the bear chasing Cody was filmed in cuts with neither one appearing in the same scene. The bear action was simple A to B. One handler would release the bear and he would go to another handler who rewarded him with food. For the fight with Big Foot, the bear was simply "play-wrestling" which he had been trained to do. The only preparation necessary for this scene was to let the bear get comfortable with the "Big Foot costume" which the trainer wore. Again, the bear was rewarded with food. After Big Foot saved Cody's life, Big Foot was captured by a professor by the name of McClarty. She and her team tranquilized Big Foot using a dart gun and placed him in a cage in the middle of town. Because Cody could not stand to see him so unhappy, he and Ben let Big Foot out of his cage so that he would be free once again. Hearing that Big Foot had escaped, our obsessive billionaire raises the reward for Big Foot's capture from one million dollars to two million dollars. Some of the townspeople head out to the woods along with hunters from all over the area. In one scene we see a man with two hunting dogs on leashes as they pull on them. This action was simple A to B, with the trainer off camera holding food out for them so they would pull. In another scene we see two pack mules and some men on horseback.